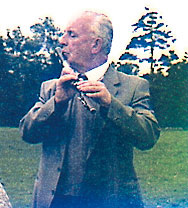 Vincent Broderick was one of many fine composers to come from Galway.

His music is quite distinctive largely because he was a flute player, whereas many other tune composers are fiddlers or accordionists. Being a flautist his tunes are within the reach of most instrumentalists and perhaps that has helped them to become popular.

Commonly played tunes include The Crock of Gold, The Turoe Stone, The Flagstone of Memories, The Tinker's Daughter, The New Broom, Around the Fairy Fort and The Whistler at the Wake. You may not know these tunes by name, but if you're a regular session goer the chances are you've heard and/or played them!

There are two tunebooks available dedicated to Vincent's compositions

The following information was written by Séamus MacMathúna as an introduction to Vincent's first book of tunes The Turoe Stone Collection Vol. 1.

Vincent was born in Carramore, Bullaun, Loughrea, Co. Galway in 1920. One of seven children, both himself and his brother Peter were to become interested in traditional Irish music at an early age, mainly under the influence of their mother Ann. By their early twenties Vincent and Peter were to become accomplished traditional musicians (the flute, mainly, and the pipes) and were to follow the example set for them by the musicians of 'The Ballinakill and Aughrim Slopes Ceili Band.'" ~ they also played regularly together for events and dances in their community... Vincent Broderick passed away in 2008.

The following appreciation from Séamus MacMathúna serves as the introduction to Vincent's book of compositions 'The Turoe Stone Collection."

With the ever growing popularity of his numerous compositions, Vincent Broderick's name and fame are assured in the annals of Irish traditional music. But, of course, that fame has been established long before this decade. His reputation for great round-the-clock sessions of music, with his late and fondly remembered brother Peter, with John Joe Gardiner and Kathleen Harrington or with fellow musicians from East Galway or the Pipers' Club, - was country-wide even before Robbie McMahon penned his epic account of 'The (1956) Fleadh down in Ennis' -

I have known Vincent Broderick since the late '50's, that's more than 30 years now. Down the years at the Pipers' Club or at the Fleadhs, wherever I met him, as well as his music, I always especially enjoyed his many stories and anecdotes about musicians and characters of byegone days. Of the many stories I could tell, the one I choose is one that I tell against myself. I had been on a recording trip up North in 1973 and, amongst many other tunes, brought back 2 fine reels played by a Northern flute-payer. They were good tunes for the flute and soon I was playing them regularly at sessions around Dublin. When I played them as 'two Fermanagh reels' in the Pipers's Club one night I guessed from the big grin on Vincent's face that I had 'put my foot in it'. 'The rainbow's End' and 'The Crock of Gold' he said jovially before giving me time and place for their composition. 'You aren't the first one to play my own tunes for me,' he assured me 'But I'd like that they'd get the names right - and the story too,' he added 'there's a story to every tune, you know.'

My many other recollections of Vincent Broderick, musician, raconteur, include the considerable part he played on Comhaltas productions through the '70's and '80's. He took part in several CCE Tours, visiting the USA, Canada and Britain, and I also recall the major role he played in several Cumann na bPiobairi shows. In particular I recall the hilarious scenes from the Mummers play in 'Fonntrai' when Vincent played 'Sir Patrick' in opposition to Sean MacTorlach's 'Cromwell'. This involved dialogue, both scripted and spontaneous, sword-fighting, step-dancing in traditional style, etc. You had to be very good or MacTorlach would steal the show, but Vincent could match him for acting or for innovation and took it all in his stride. He would lilt or sing, dance a step, or play the bodhrán and did all these spontaneously if the occasion demanded. I would dearly love to see that Mummer's play again.

Fad Saoil chugat Vincent, and thank you for those great tunes and those happy memories,