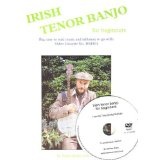 Tony "Sully" Sullivan is someone you may not have heard of unless you check the liner notes for albums or are a banjo enthusiast.
His tunes have been recorded by Martin Hayes & Dennis Cahill and Lúnasa amongst others. As a result you'll often hear them in sessions.
These tunes include The Roaring Barmaid,, Exile of Erin and The Butlers of Glen Avenue.

Born into an Irish community in England "Sully " started playing the banjo at age 15, strongly inspired by Barney Mckenna and Mick Moloney, and spent the next 15 years or so sessioning, gigging, and researching Irish music throughout Ireland and England. In 1976 he won both The All Ireland and the All Britain banjo championships.

During the 1980s Sully began touring outside Britain. In 1980/81 he went the USA and played with some notable US musicians including Ken Perlman, Andy McGann, and Dan Collins. In 1987 he joined up with Bela Fleck, Buddy Wachter, Cynthia Sayer, and Peter Meyer for the aptly named "Legends of The Banjo" tour in Germany.

He also started venturing outside the field of playing, opening his own banjo shop in Macclesfield, England in 1983 and introducing his own range of banjo models (in cooperation with luthier John Hullah) in 1989.

Tony Sullivan is also a profilic textbook author and composer. His "Sully's Irish Banjo Book" (1979) was the first ever Irish tenor banjo tutorial, and since then he has followed up with about 20 books about the banjo and Irish music. Many of his Irish style tunes have been absorbed into the tradition.

Musicians who have recorded his music include Lunasa, Michael McGoldrick, Martin Hayes and Dennis Cahill, Danú and Natalie MacMaster.

He is one of the few musicians who tries to blend Irish music and traditional jazz - the two musical styles the tenor banjo is associated with today. That, and the fact that he prefers to use a thimble rather than a plectrum, are the two main elements that make up his very unique and distinctive style.