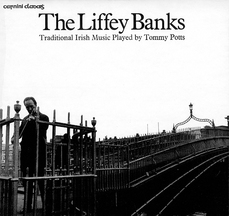 Tommy Potts is best known for virtuoso fiddle style and his unusual interpretations of well known tunes. However he also composed tunes and one in particular The Butterfly is now heard at sessions all over the world.

Tommy Potts (1912–1988) was a remarkable and innovative Irish fiddle player from Dublin. Although only one commercial recording of his playing was ever made, 'The Liffey Banks' in 1972, he has gained iconic status in traditional Irish music circles for his virtuoso musicianship and highly individual take on the Irish music tradition.

Micheal O'Suilleabhain produced a thesis about Potts and described him as an 'improvisational composer', such was the extent of his variations on traditional Irish music standards. Though Potts received no formal training he could read and write music and O'Suilleabhain's thesis includes analyses of Potts' approach. In the thesis, facsimile examples of Potts' written versions of tunes are presented, thus giving a clear impression that Potts seriously thought out his variations rather than simply inventing them as he went along. Despite the fact that he notated them it is likely that these variations came spontaneously to him and then he chose to put them down in a more structured way.

O'Suilleabhain interviewed and recorded Potts for his thesis and these recordings provide invaluable insights into Potts' genius. Potts acknowledges the influence of jazz and classical music on his approach and for this he is seen as a controversial figure, with some traditionalists claiming his music deviates too much from the tradition. Despite his controversial approach Potts is today acknowledged as a figure of vital importance with many of the top Irish traditional musicians acknowledging his importance, particularly leading fiddle players such as Frankie Gavin, Paddy Glackin and Martin Hayes, all of whom often acknowledge their debt to him in some way.

Martin Hayes in particular seems to have developed much of his style from listening to Potts, who visited Hayes' family home when Hayes was a child.

Perhaps the most important aspect of Potts' style is that he treated traditional Irish music as a creative art form rather than as music for dancing. This approach is most clearly illustrated in his version of the Hop Jig 'Top it Off' in which he deliberately adds occasional extra beats and slight pauses between phrases, thus taking the music away from an easily danceable form. Paddy Glackin adapted Potts' extra beat version of 'Tip it Off' for his recording 'Ceol ar an bhFidil le Paddy Glackin' as did the group Danú. In his thesis O'Suilleabhain claims this style makes Potts unique to the tradition, however this is not the case as there is a strong tradition of adding extra odd beats in the Donegal fiddle tradition as personified by the great John Doherty.

Nevertheless Potts was a unique musician and his contribution to the tradition is perhaps still under-appreciated, but given the influence he has had on some of the leading modern traditional musicians his importance to the tradition is likely to be better acknowledged in the future.

He was also the subject of a major television documentary "Cérbh É? Tommy Potts" on TG4, first broadcast in November 2009. In this programme, one of a series in which major figures in contemporary traditional music, profile and pay homage to a master of their craft from a bygone age, Paddy Glackin traced the life and legacy of Tommy Potts.