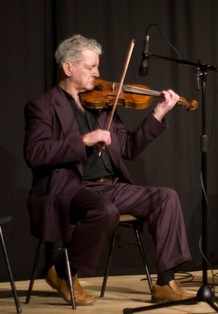 One of the legends of Irish traditional music, Tommy Peoples contributed some wonderful tunes to the tradition.

He was elected a member of 'Aosdána', Ireland's state-sponsored body for renowned artists. He was the first traditional music composer to be admitted. He was also honoured as TG4 Musician of the Year, and Composer of the Year. The only artist to receive both awards.

He was traditional musician in residence at the Balor Theatre in Ballybofey and he received an Arts Council Deis award to publish a book of his compositions.
​

Some commonly played tunes of Tommy's include Grainne's jig, The Green Fields of Glentown, Jocelyn's Jig, Black Pat's and The Gortree Reel.

Tommy Peoples was born in Co.Donegal in 1948 near a little village called St.Johnston, in the north east of the county. His first  fiddle lessons came from his first cousin Joe Cassidy. From the moment he learned his first tune Tommy fell in love with the music and from an early age developed a style that was unique whilst holding on to the Donegal influences in his music.

As a teenager Tommy went to live and work in Dublin, where he became involved in the traditional music scene of the mid sixties. His contemporaries of that period included Sean Keane and Matt Molloy of the Chieftains, Liam O' Floinn of Planxty, Paul Brady and Mary Bergin.

It was during this time that Tommy helped form a ceili band called "The Green Linnet" of which Mary Bergin was also a member. In that early period Tommy played his first professional performances with his friend Matt Molloy at the Old Sheiling Hotel.Tommy and Matt played as an intro. to the main ballad groups.Ballad groups were at the height of their popularity in these years.

In the late sixties Tommy met his future wife "Marie Linnane" who was daughter of " Kitty Linnane ", leader of the famous " Kilfenora Ceili Band " from Co.Clare.They married in 1969.

Tommy's first commercial recording was done for Comhaltas, the Irish traditional music organization. It consisted mostly of live performances in folk clubs etc. and was recorded around 1969 -70. On that L.P. he recorded one of his earlier compositions, " The Green Fields of Glentown" which is also included on his latest solo C.D. The Quiet Glen.

In the early seventies he formed a group with Matt Molloy ( Flute ), Peter Brown ( Pipes ), Triona Ni Dhomhnaill ( Harpsichord and Vocals ) and Liam Weldon R.I.P. Singer, Bodhran Player and beautiful song writer. This group was named "1691" the year of the treaty of Limerick. They recorded an album in Brittany France around 1972, which is not readily available. The group toured extensively and remained together for a couple of years.

Tommy's next venture, group wise was as a member of the " Bothy Band " which also included Matt and Triona with the addition of Paddy Keenan ( Pipes ) Micheal O Domhnaill, brother of Triona,(Guitar and Vocals) and Donal Lunny ( Bouzouki and Bodhran ).Tommy stayed with the Bothy Band for about a Year and a half, 1975-76. Kevin Burke replaced Tommy on fiddle.

Tommy plays on the Bothy Bands first recording entitled " The Bothy Band 1975 ". Previous to this Tommy had recorded a solo album, accompanied by Paul Brady on Guitar. This album was released on the Shanachie label, New York.

In 1976 Tommy recorded with Matt Molloy and Paul Brady on the " Mulligan Label " simply entitled Tommy Peoples - Matt Molloy And Paul Brady. He also features on various other recordings such as "Celtic Folkweave- Micheal O Domhnaill and Mick Hanly” and Paul Brady's " Welcome Here Kind Stranger ". Tommy also did a further recording on the Shanachie label around 1982 or so with Daithi Sproule on guitar entitled " The Iron Man " after the Scottish strathspey of that name played by Tommy on that album.

Tommy Peoples was chosen as the first recipient of Gradam Ceoil TG4 in 1998. The announcement met with unanimous approval from Tommy’s fellow musicians and from followers of traditional music worldwide.

Tommy has always been held in the highest regard as one of the most inventive and imaginative of fiddle players; his influence on younger players, particularly in his native Donegal, has been immense.

As well as being highly esteemed as a player, several of Tommy’s original compositions have found their way into the repertoires of musicians and groups who have brought them to a wider audience. The album Quiet Glen in 1998, features many of his own tunes.