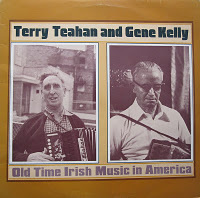 Terry 'Cuz' Teahan, was born in Gleantann in 1905. He was a student of the great Sliabh Luachra fiddle master Padraig O'Keeffe at the local school, then emigrated to Chicago in 1928. He played concertina , accordion and fiddle, and was also quite a composer of slides and polkas. Many of his tunes became very popular in Ireland and elsewhere. They are often named after him.


You can hear Teahan playing some of his own music on the following record.