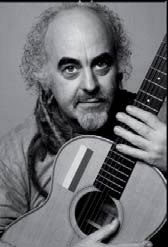 Australian born guitarist, bassist, producer and didgeridoo player Steve Cooney is one of the most dynamic modern performers in traditional music.

He's also a fine composer, known mainly for the reel Skidoo which was originally recorded by Stockton's Wing and since recorded by Sharon Shannon amongst others.

He's a noted songwriter too and his songs have been recorded by artists including Altan and Mary Black.
The following bio is a combination of material found on these two websites
http://www.discogs.com/artist/Steve+Cooney
http://www.steeplesessions.com/en/artists/143-cooney-steve

An Australian of Irish ancestry, Steve Cooney has been living in Ireland for many years. He spent a number of years living in the parish of Moore where he got to know and play with the local musicians, one of those being Maidhc Dainín. One of Ireland's leading guitarists, he is also a much sought-after and highly regarded producer, having worked with many of the big names in the Irish music industry.

From the age of seventeen he has been playing in rock bands including Bushwackers, Fruitcake and the successful folk/rock band Red Gum. In 1981 he bought a one-way ticket to Ireland where he joined Stockton's Wing, playing bass guitar and didgeridoo. Since then he has been very active performing and recording with Dermot Byrne, Sharon Shannon, Altan, Martin Hayes, Mary Black, Sliabh Notes, Séamus Begley and many others.

Steve has had a long association with Canon Goodman’s music and is one of Ireland’s leading authorities on the subject. In 1993 he performed (with Odhrán Ó Casaide) a concert of Goodman pieces to mark the opening of the Great Blasket centre in Dunquin, the first time those tunes were heard publicly in Goodman’s native West Kerry in over 100 years. In 2000 he recorded a selection of them for ‘Scéilín Ó Bhéilín’, an educational Irish language CD for schoolchildren.

With Stockton's Wing
Other albums