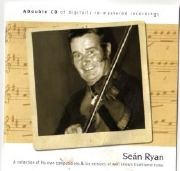 A wonderful fiddler from Tipperary, Seán Ryan composed hundreds of tunes, some of which are collected in two books The Hidden Ireland and Seán Ryan's Dream and many of them are found on the recently released double CD Seán Ryan: A Collection.

Many of his tunes are commonly played including Twilight In Portroe, The Nightingale, The Glen of Aherlow, The Dooney Rock and The Castle Jig.

This biography was taken from the website dedicated to his music.

Seán Ryan was born in Nenagh and baptised as John Francis Ryan. During his younger days his family moved to Newtown.

From a young age he was very interested in Irish traditional music as he came from a family and an area steeped in Irish traditional music. At around 11 years of age he started to learn the fiddle. Seán's father, Thomas, also a great fiddler taught him by getting him to move the bow across the strings, while Thomas fingered the notes. Many people attributed Seán's great bow hand to this initial method of learning.

Seán's early musical influences were his father Thomas, Dinny O'Brien, father of the accordionist Paddy O'Brien. He played with many local musicians and members of the Aughrim Slopes Ceili Band, Paddy Kelly, Paddy Fahy and Eddie Moloney who regularly shared sessions in Tipperary and Galway. He played with the original Bridge Ceili Band named after the Bridge in Newtown.

When he moved to Portarlington he played with many bands including Danny Coughlan's Ballyoran Ceili Band and Marie Tyrrell's Band from Edenderry before forming his own Sean Ryan Ceili Band in 1961. This band were placed 3 rd in the All Ireland Band Competition in 1963.

In 1968 the Seán Ryan trio, consisting of himself, Paddy O'Brien (Daingean) and his wife Kathleen toured America. In 1969 Seán directed a tour of Irish Champions who toured America. The members of this tour were Seán and Kathleen Ryan, Paddy O'Brien (Newtown), Peter O'Loughlin, Denis Gilroy, Thomas Quinlivan, Eileen Begley. Labhrás O'Murchu acted as M.C. on the tour.

Seán formed a quartet with Kathleen on piano, Mickey Campbell on drums and Pat Lyons on accordion.

Seán composed several hundred tunes and made many recordings. He passed away on November 15 th 1985. A stone sculpture has been erected in his memory in Newtown, Co. Tipperary.

He is remembered today as the composer of many great tunes which Irish musicians often play in sessions all over the world, sometimes without knowing their origin.
He composed several hundred tunes 150 of which have been published in 2 books.

•  SEAN RYAN: A COLLECTION (2CD Set including one CD of him playing his own tunes)

• Sean Ryan (Gael Linn) 78. Re issued in the 1990's on the compilation Milestone at the Garden (Rounder Records)