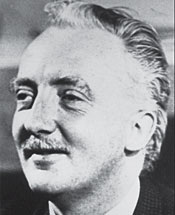 One of the giant figures in the history of Irish music, Seán Ó Riada made a huge impact in his short life. His main achievement was in reviving traditional Irish music and getting people who previously dismissed it to take it seriously as an art form.

Seán is said to have composed many tunes which he let filter into the tradition. Since he is not identified as the composer of any commonly played Irish dance tunes one cannot say he made a great contribution as a composer of traditional Irish music, but then again maybe he did!

He did compose the melodies to two songs which are widely sung and played Mná na hÉireann and Ag Críost an tSíol.

The following information was sourced from http://homepages.iol.ie/~ronolan/riada.html

Sean O Riada was born in Cork city in 1931. His mother was from Ballyvourney, Co Cork, and his father from Clare. At a young age the family moved to Adare, Co Limerick, before returning to Cork and he went to school at Farranferris. While in Adare where his father was posted, he started to learn the piano and violin.
He told a newspaper in the mid-1960s: "I have loved music for as long as I can remember. Both my father and mother were traditional fiddlers and we often had local musicians in our house - that was when we were living in Limerick, where there was a very good school of traditional fiddlers."He continued: "Yes, my father had a wonderful store of music. I remember him telling me that he would walk seven miles, and do a day's work, to learn a tune."
He took music in his Leaving Cert exam and went to university in Cork to study Classics. After two years he switched to Music, graduating in 1952 with a B. Mus. At this time he used the English form of his name - John Reidy. While a student he played piano with jazz and dance bands in Cork.
He got a job as assistant director of music - mostly administrative work - with Radio Eireann in 1953. He married Ruth Coughlan and they set up home in Dublin. After two years he left and went to Paris - "because I was fed up." There he did programmes for Radiodiffusion Television Francaise. He was now also composing and gave some piano recitals of his work. Offered a teaching job in Saigon, he turned it down. A year later that city was ravaged by war.
Returning to Ireland he got a job in 1957 as musical director of the Abbey Theatre in Dublin. He had already renewed acquaintance in Dublin with Riobard Mac Gorain, a fellow student at Cork. Mac Gorain was the senior executive at Gael-linn, a company involved in Irish language promotion. O Riada wanted to write Irish articles for Comhair, which Mac Gorain edited.
It proved a valuable contact as Gael-linn was to become involved in film and record production. Mac Gorain and film director George Morrison asked O Riada to produce the musical score for the film Mise Eire. It was performed by the Radio Eireann Symphony Orchestra. Both the film, which dealt with the War of Independence, and the music captured the imagination of the Irish public. O Riada's dramatic and imaginative use of traditional airs and marches along with his own scores, made him a household name when the film went on general release in 1960. The follow-up Saoirse again exhibited his talents. In 1961 or '62 he produced the score for the film The Playboy of the Western World, this time utilising Ceoltoiri Cualann. In 1966 he produced the music for three short films by Louis Marcus and Gael-linn: Rhapsody of a River (about the Lee), Pobal and An Tine Beo. He also produced the score for the feature film Young Cassidy.
O Riada wrote a full-length play Spailpin a Run about the life of the poet Eoghan Rua O Suilleabhain whose poems survived as songs in Munster long after his death. The play was staged in the Damer in Dublin and O Riada turned up every night to play the piano.
Abbey sessions
Meanwhile The Abbey was staging Song of the Anvil by Bryan McMahon, which called for incidental music. "It had to be some kind of traditional music," he told journalist Marion Fitzgerald. "So I went into the whole question of ensemble playing."
In his quest to recruit musicians he initially met accordeonist Eamon de Buitlear who introduced him to Paddy Moloney. Soon whistle player Sean Potts, fiddler Martin Fay, accordeon player Sonny Brogan, flute player Vincent Broderick and fiddler and concertina player John Kelly joined in. Rehearsals tended to become late night sessions. Martin Fay had already being playing violin with the Abbey's six-piece orchestra. Soon the famous rehearsal sessions commenced at O Riada's home in Galloping Green, between Dublin and Bray. Michael Tubridy had replaced Vincent Broderick on flute. O Riada played bodhran and Ronnie McShane played bones.
Sean Mac Reamoinn, who was present at the first rehearsal, was to write: "What O Riada was doing was developing the inner logic of the music and the only parallel I can make is that of jazz where he was giving different instruments their head. They did their break, as it were, but he managed to weld them into a unity. And the sound that emerged, with tunes that many of us knew for a long time, was quite exciting."

Enthusiastic
O Riada had the musicians rehearsing every Saturday night at Galloping Green. One can only imagine the interplay that took place between O Riada and these traditional musicians, particularly the older Kelly, immersed in the music and traditions of south-west Clare and north Kerry, and the young uilleann piper Paddy Moloney, ever enthusiastic to try new ideas. O Riada wanted an instrument to recreate the sound of the long defunct metal string harp - plucked with the fingernails - and considering the harpsichord the closest substitute, introduced it to the line up.
Ceoltoiri Cualann was an instant success when it played in public in Dublin. Using his radio contacts, O Riada and Ceoltoiri Cualann did a series on Radio Eireann. Reacaireacht an Riadaigh brought the group to a wider audience. This was followed by another series Flea Cheoil an Raidio. He also brought in singers Sean O Se and Darach O Cathain. O Se's recording of An Puc ar Buile was the nearest the Irish language came to enjoying a pop chart hit. Coming as it did at the very start of the ballad boom, Ceoltoiri Cualann's innovations and arrangements had a huge influence on successive groups like Planxty and won over a new audience to Irish traditional music. They also revived the music of the 18th century composers, including O'Carolan and O Catháin.
In 1962 Garech de Brun set up Claddagh Records. Gradually Paddy Moloney and the others formed The Chieftains in 1963. When they released their first album The Chieftains, O Riada's gave it a mixed welcome.
Ceoltoiri Cualann continued to exist and perform occasionally. In 1970, when he announced on radio that he was disbanding Ceoltoiri, the musicians were as much surprised as the general public.
In 1963 he abandoned the job in The Abbey and decided to take his family and live in the Gaeltacht, initially in the Kerry Gaeltacht, before setting up house in Cul Aodha, near Ballyvourney in the west Cork Gaeltacht. It was in the Kerry Gaeltacht that he had practised his Irish in the late 1950s and became friends with, and stayed in the house of sean-nos singer Sean de hOra. Also in 1963 he took up the post of Lecturer in Irish Music in University College, Cork. Two of his students were the piper Tomas O Cannain (Na Fili) and the composer and academic Micheal O Suilleabhain.
From Coolea he commuted to Dublin for performances with Ceoltoiri. They released a series of LPs Reacaireacht an Riadaigh, O Riada sa Gaiety, and O Riada. He produced an influential 15-part series for Radio Eireann Our Musical Heritage which explored the various facets of Irish traditional music and song. In it he lambasted the ceili bands, highlighted the various personal and regional styles and, as Breandan Breathnach was to point out from the wings, ignored the thousands of folk songs in English. But the series, coinciding with the ballad boom and the folk revival in Britain and the USA, inspired a reawakening of interest in the Irish musical heritage.
He also composed music for Mass and, performed by Chor Cuil Aodha, led by his son Peadar, this is the "O Riada Mass" that brings the Willie Clancy Summer School and now many other traditional music gatherings to a close. He set the words of Ag Criost and Siol to music for it.
He was hospitalised in Cork in the summer of 1971. In September he underwent an operation in London. His death in October came as a shock to the Irish people. Months before he died he made one final recording. On an antique harpsichord in Garech de Brun house in the Wicklow mountains, he recorded the poignant O Riada's Farewell.
In the course of a one-hour TV documentary made by Sean O Mordha, O Riada said: "I wear two caps." The first cap, of course, was his involvement in Irish music. The second was an unfulfilled ambition to win recognition as a composer of European classical music. From his days in Paris he had been composing classical music. Titles such as Nomos and Hercules dux Ferraiai give us a clue to the Sean O Raida who first opted for Classics at university.
As the poet John Montague once observed of O Riada's drink habit: "What do you do if you are a composer and your works are only performed once and respectfully buried. Frustration is not the word for it." It wasn't a case that his compositions weren't good, they just weren't great.
In 2005 UCC acquired his archive and Gael Linn reissued most of his work in CD form. © 2000-08.