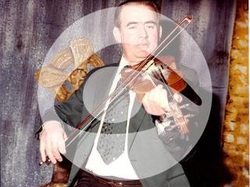 Seán Nugent is nowadays perhaps best known for being the father of the US-based flute player Larry Nugent. In his own lifetime he was known as the leader of the Pride of Erin Ceili Band.

His music is largely unknown outside of Fermanagh where he lived. A collection of his tunes called The High Hills of Largy and an accompanying CD have been published.

His most recorded tune is The Monument, Larry Nugent recorded it on his CD Two for Two, it was also  recorded by Dave Flynn and Ciarán Swift on Flynn's Draíocht CD and it features in Sarah McQuaid's Irish DADGAD Guitar Book and CD.

Sean Nugent was born in the townland of Kildrum, Dromore, Co. Tyrone but lived most of his life in Lack, Co. Fermanagh. He received rudimentary instruction at an early age from his mother, Minnie, a sister of the celebrated bard, Felix Kearney. Sean played and kept music alive in Ulster for decades. His individual prowess was rewarded in 1978 when he won the All-Ireland Fiddle Competition at Fleadh Ceoil na hÉireann in Listowel. He toured the USA and Britain with Comhaltas Ceooltóirí Éireann in 1979.

In addition, to his own achievements Sean led the Pride of Erin Ceili Band for several decades. They recorded two albums Harvest Time in Ireland and the Fermanagh Ceili and won much acclaim on the ceili band scene. To their credit, they also achieved two All—Ireland Titles in 1983 in Kilkenny and in 1985 in Listowel.

Sean is remembered as a devoted teacher of traditional music. He derived much pleasure and a sense of achievement from the instruction of others. He had classes in Dromore, Irvinestown, Ederney, Aghyaran and Tempo as well as many pupils who came to his own home. He had several junior ceili bands which won many Ulster titles and an All-Ireland title in Sligo in 1989.

Sean began composing music later in life. His fond affection for the people and places of his locality are reflected in his compositions.

The book and CD of Sean's music is called the High Hills of Largy where Sean spent most of his life. The CD features Sean’s son, Laurence, on flute, his daughter, Catherine, singing a song and his granddaughter, Áine Nugent, on fiddle. Gerry O’Connor from Dundalk produced the album. A number of very talented musicians join him on the album: Brian McGrath [banjo and piano], Cathal McConnell [flute], Tony Smith [fiddle], Pat McManus [guitar] and Fintan McManus [bouzouki] as well as some of Sean’s past pupils: Brenda McCann [fiddle], Annette Owens [accordion], Aidan O’Neill [concertina], Catherine Dunne [accordion and fiddle], Janette Durnion [fiddle] and Aisling McPhillips [flute].

The first track on the album was recorded on Laurence Nugent’s first CD a few months before Sean passed away in 1996. With Sean Nugent [fiddle], Laurence Nugent [flute] and Arty McGlynn, a cousin of Sean’s [guitar] playing the Mossy Banks and the title tune, The High Hills of Largy.