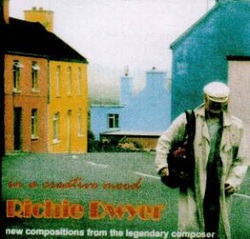 Yet another talented Dwyer family member, accordionist Richie Dwyer was named TG4 Gradam Ceoil Composer of the Year in 2004.


In 2002 he released a CD called 'In a Creative Mood' which features many of his compositions, the most famous of which are simply called Richie Dwyers.

Richie Dwyer is a native of Eyries on the Beara Peninsula in west Cork, where he grew up in the famous Dwyer musical family.

Economic circumstances forced emigration from the area and Richie moved first to England and later to the United States. He recently returned to settle in Ireland and now regularly performs in and around his hometown of Ennis.

Since an early age Richie Dwyer has been a composer of tunes and for many years his compositions have been part of the traditional repertoire, not just in Ireland, but also among musicians in America and Britain.