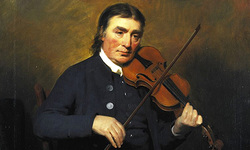 One of the legends of Scottish music, fiddle master Niel Gow has also had a strong impact on the Irish tradition since some of his tunes have been adapted into it.

Miss McLeod's Reel is now one of the most standard of tunes in the Irish traditional repertoire, although there is some debate as to whether Gow actually composed it.

Farewell to Whiskey is now commonly played in the style of a Northern Polka, although it was written as a lament.

The air Niel Gow’s lament for the death of his second wife is also commonly played.

Gow could be seen to have a strong influence on the Donegal repertoire since according to this article (http://www.fiddlingaround.co.uk/scotland/index.html) he 'is often credited with inventing, or at least popularising the famous “Scotch Snap”.

Indeed several more tunes of his are common to the Donegal tradition.

The following biography comes from Wikipedia.

Niel Gow (1727–1807) was the most famous Scottish fiddler and dancie (traveling dance instructor and bard) of the eighteenth century.

Gow was born in Inver, Perthshire, as the son of John Gow and Catherine McEwan. He started playing the fiddle when very young and at age 13 received his first formal lessons from one John Cameron. In spite of being something of a musical prodigy, he originally trained as a weaver, but eventually gave up that trade to become a full-time musician. He was widely considered the best fiddle player in Perthshire, an area which was renowned for its musicians—the story goes that at age 18 he entered a competition that was being judged by John McCraw, a blind musician, who awarded him the first prize and then went on to claim that he "would ken his bow hand among a hunder players" (detect Niel's style among a hundred players). This attracted the attention of the Duke of Atholl, who became Niel's patron, and also ensured Niel's employment for balls and dance parties put on by the local nobility. In time he became renowned as a fiddler.

Niel Gow was married twice. His first wife was Margaret Wiseman, and they had five sons and three daughters. His sons William, Andrew (1760), Nathaniel (1763), and John (1764) all followed their father as fiddlers and composers of fiddle music; two of the daughters were Margaret (1759) and Grizel (1761). The youngest son, Daniel (1765), died in infancy; William died in 1791 at age 40, and Andrew died in 1794 at 34. Of Niel's sons, Nathaniel is by far the most well-known and another fine composer of Scottish music, with nearly two hundred tunes to his credit. As a widower, Niel married Margaret Urquhart from Perth in 1768, and they went on to share a happy marriage until she died in 1805. Niel was deeply hurt by her death, and stopped playing the fiddle for a while. When his friends finally convinced him to pick it up again, the first thing he played was his 'Lament for the Death of his Second Wife' (see compositions). Niel died at Inver on 1 March 1807, aged 80.

According to John Glen (1895), Niel Gow composed, or is credited with composing eighty-seven dance tunes, "some of which are excellent." These tunes form the backstay of Scottish country dance music even today. However, it must be said that he was not above claiming good material from other composers as his own; Glen claims that at least a quarter of the eighty-seven tunes are either derived from older tunes or are copies of tunes published earlier elsewhere, often under a different title.

This "borrowing" was a common practice at the time and it didn't seem to hurt his reputation; in fact, the famous painter Henry Raeburn was commissioned to paint him several times. It also must be said that Celtic musicians are usually happy to share tunes and habitually lax about titles, with no intent to defraud other musicians. A tune may be known by multiple titles by different sets of people. Moreover, it's difficult to tell a tune composed in the eighteenth century (unless by Niel Gow or Robert Burns), and no longer in copyright, from one composed in the 1980s. A good example of this practice is the jig "Calliope House" by Dave Richardson of the Boys of the Lough and introduced on their 1984 album Open Road, which appears on many recordings labeled "traditional."

Many of Niel Gow's compositions are still played today at ceilidhs and country dances. He himself spelled his name Niel, although others sometimes spell it Neil or even Neal. To add to the confusion he had a very musical grandson (by Nathaniel) who did spell his name "Neil".

The annual Niel Gow Fiddle Festival takes place in Dunkeld and Birnam, Perthshire, Scotland. It was established in 2004 to celebrate the life and music of Gow. It is envisaged that through time the festival and other activities will gather enough funds to erect a fitting memorial to him in Dunkeld and Birnam. The 2008 festival took place between 14-16 March.