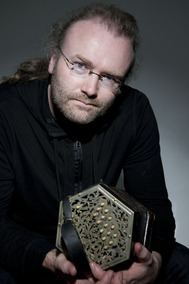 Concertina player Niall Vallely comes from the famous Armagh family that has produced so many good musicians.

His music stretches across genres from trad to jazz to classical. He is a member of the band Buille with his brother Caoimhín.


This is his official biography.

Niall Vallely was born in Armagh in 1970 and began learning the concertina at the age of seven, taught by his parents Brian and Eithne Vallely, founders of the Armagh Pipers' Club.  Over the years he has developed a unique approach to playing the instrument that was initially influenced by his fiddle- and uilleann pipe-playing parents, and indeed spent several years learning the pipes himself.  When he went to secondary school he also began learning Classical music on trumpet and piano.

A resident of Cork since 1988, Niall completed a degree in music at University College Cork in 1992 and subsequently spent a few years working on an MA in Ethnomusicology at UCC and the University of Limerick.  As a student he was involved in various musical projects with composer/pianist Mícheál Ó Súilleabháin including Eklego (a project mixing traditional and electro-acoustic music) and Hiberno-Jazz. In 1992 Niall was featured on the highly acclaimed BBC/RTE television series 'A River of Sound', and had a track included on the Virgin album and BBC video that accompanied the series.

In 1990 Niall formed NOMOS who went on to become internationally recognised as one of the most important Irish bands of recent times. Their debut album ‘I Won’t Be Afraid Any More’ was released in 1995 to widespread critical acclaim – it was included as one of Folk Roots magazines albums of the year and topped the Hot Press Roots Charts.  The 1997 release of ‘Set You Free’ confirmed the band’s position as one of Ireland’s most forward-looking traditional acts.  After touring full-time throughout Europe, North America, Australia and Hong Kong for seven years, the band broke up in 2000.

Since 2000 Niall has been touring and recording as part of the Karan Casey Band as well as being in involved in projects with the likes of Bluegrass Grammy-winner Tim O’Brien, former Bothy Band piper Paddy Keenan, percussionist and composer Mel Mercier and jazz musicians Lewis Nash, Regina Carter and David O’Rourke.

In 1999 Niall released his debut solo album, ‘Beyond Words’ which featured a mixture of new compositions and traditional tunes.  In 2002 Niall recorded a duet album with his brother Cillian on pipes entitled, ‘Callan Bridge’. His most recent project is the band Buille, which released their debut album on the Vertical label in 2005 and a follow-up in May 2009.

Over the past number of years Niall has also established himself as an accomplished record producer.  Credits include Cork traditional band North Cregg’s first two albums, singer-songwriter Barry Kerr’s “The World Looks Away”, Karan Casey’s “Chasing the Sun” and “The Seal Maiden” and Caoimhín Vallely’s “Strayaway”.

Since the early 1990s Niall has been working at composing traditional-style tunes.  As well as recording these on his own albums, his tunes have been performed by leading acts such as Lunasa, Sharon Shannon, Michael McGoldrick, Liz Carroll and Scottish acts the Poozies, Daimh, Gabe McVarish and Duncan Chisholm, while some of them have become ‘standards’ in sessions throughout the world.  In more recent years he has been expanding the scope of his compositions to embrace larger scale forms and instrumentation.  “The Singing Stream” written for four sets of Uilleann Pipes was commissioned by the William Kennedy Piping Festival and had performances in 2002 and 2003.  “40” was written for the 40th Anniversary of the Armagh Pipers’ Club and performed by over 100 members of the Club in Armagh’s Marketplace Theatre in 2006.  In 2007 Niall composed an original score for the BBC TV documentary “The Flight of the Earls”.  Some of this music formed the basis for “Flight-Imeacht” – a 20-minute piece for traditional instruments (pipes, concertina, flute, percussion), chamber orchestra and piano.  This was premiered in Belfast’s Grand Opera House at the Belfast Festival in 2007 and was performed again at the Irish Institute for Europe in Leuven, Belgium in February 2008.  “Rakish” a multi-media piece based on the music of piper Johnny Doran and poet Gearóid Mac Lochlainn, was premiered in November 2008.  In 2009 Niall was commissioned by RTE Lyric FM and the Cork Folk Festival to write a major work for concertina and strings – “The Red Tree” was premiered at the Cork Folk Festival and subsequently performed at Glasgow’s Celtic Connections.

In the past year Niall has completed commissions for the RTE Vanbrugh String Quartet, cellist Kate Ellis and fiddle-player Zoe Conway as well as an arrangement of Steve Reich’s “6 Marimbas” for traditional musicians (performed before the composer himself at Cork’s Opera House). He is currently working on new commissions for the world-renowned Kronos Quartet and Ireland’s leading contemporary music group, the Crash Ensemble as well as touring with Buille and Karan Casey.


- Barry Kerr – The World Looks Away