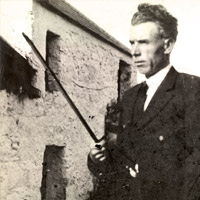 Neillidh Boyle was a unique and distinctive fiddler from Donegal. Though best known as a virtuoso fiddler, his biggest claim to fame is that he composed the now standard reel The Moving Cloud. Boyle's original version in the key of F, is considerably different to the common version played in sessions today. Boyle can be heard explaining his inspiration for the tune (and giving out about other people playing it wrongly!) on the 3 CD set A Feeling in the Blood, released by Cairdeas na bhFidileirí.

The following biography is sourced from

Neillidh Boyle was born in 1889 in Pennsylvania , USA, to immigrant parents who had a great interest in maintaining their family's links to all aspects of Irish culture.

They Boyles returned home to Donegal by the time that Neillidh was eight years old and set up home in Cronashallog, near Dungloe in northwest Donegal. Neillidh's neighbours and schoolmaster were amazed at his fluency in both the Irish language and music as he had just arrived from America.

In later life Neillidh attributed much of his music to the lilting of his Mother when he was a child. He came to be regarded as a fiddler of unheard of mastery among the fiddlers of Donegal. Neillidh had mastered playing in all keys and position playing.

He worked for a time with a travelling picture show. The group would set up in local halls in west and north Donegal. Normally a piano would provide suitable music for the various scenes in the film, however, in Donegal it was Neillidh and his fiddle. He also played with a jazz band for a brief time.

The biggest impact that he made was in his radio broadcasts. Not every house had a radio at the time, so people used to gather in houses in order to hear traditional music broadcasts as they were publicised in advance in the newspapers.

He also travelled widely around the small halls all around Donegal which hosted musical events.

Neillidh recorded a few tunes on three recordings for the Regal Zonophone label in the days of 78's as well as a few tracks for The Folklore Commission and for B.B.C. collectors.

His son Paddy played the fiddle, as do at least three of his Grandchildren