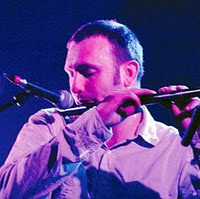 Michael McGoldrick is one of the superstars of modern traditional music. An exceptional flautist, whistler and piper he is also renowned as a composer and several of his tunes are played regularly in sessions, particularly by younger musicians. His most commonly played tunes are Trip to Herves and Farewell to Whalley Range.

Born in Manchester to Irish parents, Michael McGoldrick was encouraged by the thriving traditional Irish music scene in the city and by the age of 15, he had already won numerous All-Ireland Championships after swapping bodhran to play flute and whistles.

The Didsbury flutist made a name for himself whilst still at school, as a founder-member of Toss The Feathers, the most influential Celtic rock band in Manchester. He performed on all of 'The Tossers' releases and became the first piper/flautist to win the acclaimed BBC Radio Two Young Tradition Award in September 1995.

The sudden interest in his music resulted in the recording of the superb "Champions Of The North" album with Toss The Feathers' highly acclaimed fiddler, Dezi Donnelly. By November of '95, Mike had formed Flook!, the legendary folk act with fellow flautists Brian Finnegan and Sarah Allen. The trio won massive praise for their electrifying live gigs which were amazingly performed without a backing band.

In between touring with Flook! and Toss The Feathers, Michael found time in 1996 to record his debut solo album, "Morning Rory" (a parody of Oasis's "Morning Glory", it was named after his new-born son). Not surprisingly the album received widespread rave reviews and provided him with the acclaim of being one of the world's greatest wooden flutists. It stayed at no.1 for 5 weeks in the Irish Folk and Roots charts with its all-star cast which included Dezi Donnelly and guitarist Ed Boyd, who was later to join Flook!

December 1996 saw Mike fulfill a dream shared by many a Mancunain; performing as himself, he starred at an Alec Gilroy party in Coronation Street.

In 1997, Mike announced that he would be leaving Flook! to concentrate on his other work (which included touring with Toss The Feathers and returning to a more 'traditional' approach with Arcady, on their "Many Happy Returns" album). It was at this time that he was invited to join Scottish folk-legends Capercaillie, with whom he recorded "Beautiful Wasteland". Michael has remained a member of Capercaillie ever since and contributed the interestingly-titled track, "Faitte Gu Whalley Range" ("Farewell to Whalley Range") to the "Nadurra" album.

In 1998 Mike helped form yet another band; the self-titled debut album from Irish folk artists, Lunasa, won many plaudits and he returned a year later to contribute to the follow-up album, "Otherworld", which includes the track, "Heaton Chapel".

'In July '98 he found time to team up with artists like Jim Kerr, Youssou N'Dour and John Cale to appear on Breton and Celtic musician, Alan Stivell's "1 Douar" album. By this time, Michael had earned a reputation for redefining traditional music, and his next contributions were to reinforce that opinion; he appeared on the amazing Kate Rusby's first two albums ("Hourglass" and "Sleepless") before joining the awesome Afro Celt Sound System and fellow members of Capercaillie, (Charlie McKerron, John Saich and Laura McKerron), for two new projects. Big Sky's "Volume One - The Source" and Afro Celt Sound System's "Volume Two - Release" (both 1999), winning widespread praise in the music industry.

"Fused", is a masterpiece, mixing traditional with trance and fusion. The collection of some of Mike's favourite tunes as well as some brilliant self-penned tracks has been described as one of the most ground-breaking folk albums of all time, redirecting the future of traditional music. The album boasts contributions from some of the leading lights in Celtic music, including Capercaillie's Donald Shaw with Alan Kelly and Dezi Donnelly, who by now had been crowned 1999 Young Traditional Musician of the Year. With brilliant performances by Flook! members John Jo Kelly and Ed Boyd, the album also features the guest vocals from Karan Casey and Capercaillie's Karen Matheson.

Combining various musical styles and instruments, including trumpet and saxophone with tablas, bamboo flute and electric guitar, "Fused" could not have been more appropiately named. The man who Mike is often described as being the celtic version of, DJ Talvin Singh, also contributes samples to form an end result that is a stunning cycle of instrumentals blending jungle and hip-hop beats with jazz, Asian and Celtic music. Michael McGoldrick seems to have mixed all of Manchester's musical influences onto one album.

Thanks to the likes of Michael, Kate Rusby and John McCusker, folk music is becoming more and more popular with every release, collecting new fans with its refreshing exciting approach. The three young musicians teamed up again on John McCusker's brilliant "Yellow Hoose" album in 2000. Mike is an inspired musician although amazingly he can not read or write a note of music. His work is highly celebrated whether it be on his solo albums or with Toss The Feathers, Flook!, Capercaillie or as a session musician he has always remained determined to re-write the rule book.

In 2001, he joined up with Scottish pipe player, John McSherry, also ex-Lunasa, to release the album "At First Light". The album, more traditional than his solo releases, also features Dezi Donnelly and Ed Boyd, mixing traditional tunes with some new reels, including Mike's 'Farewell To Whalley Range'. The way the two musicians compliment each other left critics drop-jawed and increased Michael's recognition even further outside of Manchester.

Teaming up with John Joe Kelly and Dezi Donnelly, as well as playing with Capercaille, Mike won further acclaim for his performances at the Cambridge Folk Festival later that year. Asking the crowd, "Is there anyone here from Manchester?" and instructing them to "get up and dance", his determination to modernise folk music is a refreshing approach.

By fusing traditional music with trance or jazz, as he did recently at a Band On The Wall gig in Manchester, Mike is already regarded as one of the greatest flute players of all time. Check him out and you too will become hooked to the crossover of traditional Irish music to modern day sound - it can't be too long before a mainstream Manchester band asks him to contribute to their work.

Mike McGoldrick's new solo album, "Wired" is the product of 3 years writing, recording, experimenting and perfecting his art, it is the natural successor to his seminal album "Fused", only even bolder and more captivating, incorporating alternative sounds into traditional music to create a brilliant fusion at the cutting edge of folk music that positively bursts with energy.