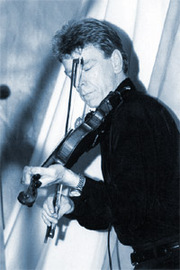 Maurice Lennon comes from a great musical pedigree being the son of Ben Lennon and nephew of Charlie Lennon.

He was a member of Stockton's Wing and some of his compositions were introduced to the tradition by them.
Now living in the USA, most recently Maurice has been bravely battling cancer but his passion for music remains and he travelled back home to Ireland in 2011 to help honour his father Ben who received the lifetime achievement award at the TG4 Gradam Ceoil Awards.

Popular tunes by Maurice include The Stone of Destiny, The Golden Stud, The Trip to London and The Belltable Waltz.

Maurice Lennon is a name recognised by many people in the now vast world that is Irish Music. Maurice began playing traditional music at the age of 13. At the age of 17 he won the Senior All Ireland Fiddle Championship, following in the footsteps of such great players as Seamus Connolly, Brendan McGlinchy and Liz Carroll. He was later followed by players such as of Desi Donnelly, Eileen Ivers, and Martin Hayes.

The 1980’s were to prove an exciting time for Maurice, he was a co-founder of 'Stockton's Wing', who went on to attain almost super-group status, in addition to which he had the great pleasure of sharing the same stage with a host of world renowned artists including, Frank Sinatra, Liza Minnelli, Sammy Davis Jr., Stephan Grapelli, Michael Jackson, as well as performing and appearing in the superb Irish film, "The Field", which featured Richard Harris, Sean Bean, John Hurt, and Tom Berringer amongst others.

Since ending his long time love affair with "The Wing" Maurice has been concentrating on developing his first real love of composing music and writing lyrics. His recent compositions have featured on Daniel O'Donnell's Greatest Hits album, and have been performed by the 'Nova Scotia Symphony Orchestra, and the University of Louisiana choir. His composition 'If Ever You Were Mine' has been recorded by ‘Cherish the Ladies’ and ‘Natalie McMaster’. Working with such diverse producers as Bill Whelan, John Ryan, Shaun Davey, P.J.Curtis, Steve Cooney and now with Donal Lunny, Maurice is setting his sights on working as a producer in his own right.

Performance is still a very integral part of Maurice's music. In recent years Maurice has performed as a special guest musician with Ireland's award winning singer Sean Keane. In the summer of 2001 Maurice was approached by the Ragus group from the Aran Islands to produce their new album and become the musical advisor. This music developed into a phenomenally successful live show, which had a two-month sell-out run in Dublin's premier venue, Vicar Street. In addition to producing their album, Maurice also wrote a piece for the show and the album called 'Island Memories', of which reviewers wrote "ex-Stockton's Wing fiddler Maurice Lennon contributed some fine new compositions …" and "there are a number of original compositions from founder member of Stockton's Wing, including a piece he wrote for the show called 'Island Memories'."

The album Brian Boru - The High King of Tara saw Lennon embarking on his most ambitious project to date. A musical portrait of Boru, a 10th Century Irish hero who defended his country against the pillaging Vikings, Lennon's sweeping suite captures the passion, the terror and the sheer villainy and epic heroism of the times with all the laconic ease that we've grown accustomed to expect from this most understated of fiddlers and composers.