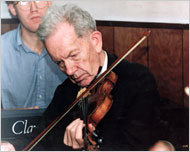 Martin Wynne was one of the great Sligo fiddlers of the 20th Century.

He is now chiefly remembered for his four commonly played reels that go by his name Martin Wynne's No.1, No.2, No.3 and No.4.

This short bio comes from http://www.irishfiddle.com/wynne.html

Martin Wynne was born in the townland of Everlawn, Bunninadden, Co. Sligo in 1913.

Martin Emigrated to England in the 1930's and played in the Garry Owen Ceili Band which included his nieghbour, Joe O'Dowd. He returned home for a short time in 1939,
before emigrating to America in the 1940's.

A fiddle player of great skill, Martin made a significant contribution to traditional music by his highly popular reel compositions, tunes well known wherever Irish music is played. One of the last players in the great Sligo fiddling tradition, Martin passed away in 1998.


The following Obituary by Don Meade is taken from http://comhaltas.ie/music/treoir/detail/farewell_to_martin_the_master/

Martin Wynne, the celebrated County Sligo fiddler and composer of traditional dance tunes passed away on January 6th at the age of 84 in Buffalo, New York. A long time resident of the Bronx, Martin was for nearly half a century one of the most respected Irish traditional musicians in America.

Wynne was born in 1913 in Everlawn, Buninadden, County Sligo. His native south Sligo was the most famous hotbed of traditional music in Ireland in the early decades of this century. Michael Coleman, James Morrison and Paddy Killoran, all of whom recorded influential 78 prm discs in New York, were only the best known of the many talented south Sligo fiddlers of those years. Growing up in such surroundings, it was only natural that Martin would take up the fiddle at a young age. In the dire economic climate of the times, it was also only natural that he would have to leave Ireland to make a living.

Martin left Sligo for London in 1937. By that time he had already composed some of the tunes for which he would become famous. In the English capital, he met and played with musicians from every part of Ireland, many of whom made ‘Martin Wynne’s Reels’ part of their permanent repertoire. In 1939, Martin went home to Sligo for the duration of World War II.

Returning to London in 1946, he joined the céilí band run by his fellow Sligo man Johnny Muldoon, and performed in Muldoon’s dance halls: the Garryowen in Hammersmith and the Shannon Club in Kilburn. Among Martin’s musical associates in London were the Limerick flute player Paddy Taylor and the renowned Sligo fiddler Joe O’Dowd, with whom he made a rare 78 rpm recording.

In 1948, Martin followed the path of many other Sligo fiddlers and took an emigrant boat to America. After a brief stay in Buffalo, he moved to New York City, where he settled in the Bronx; he found work with Con Ed and later with the US Post Office. Martin arrived in the Bronx too late to meet Michael Coleman and James Morrison, both of whom had died in the mid-40’s. He did meet up, however, with Paddy Killoran and with another great south Sligo fiddler, James ‘Lad’ O’Beirne.

O’Beirne’s circle included the cream of New York musicians in the 1940’s and ‘50’s, including fiddlers Andy McGann and Paddy Reynolds. Reynolds, a Longford-born fiddler who became a close musical associate of Wynne, eulogized his old friend last week in the following words:

Martin Wynne was a great musician. I don’t think I met anyone that knew more about music, and about Irish music, than Martin, except for the Lad O’Beirne. Martin was a perfectionist as far as music was concerned, but he was the most polite critic you’d ever want to know. He would never make a remark about any musician either personally to him or behind his back, not ever. He was a real gentleman. But Martin knew his music from A to Z. All the music that he composed speaks for itself, because it was musically in great taste and the work of a master. I miss him very much.

Wynne was also a great influence on younger New York musicians. In the 1970’s, the late Tyrone fiddler Jim Conway prevailed upon Martin to tutor his son Brian in the intricacies of the Sligo style. Martin obliged and Brian, who went on to win the All-Ireland senior fiddle championship in 1986, says of his mentor:

Martin was universally thought of as a very kind, humble man. I was personally very fortunate to have him as a friend and a teacher.

Late in life, Martin began to receive some long overdue recognition for his contributions to Irish traditional music. In 1989, Sligo town was selected as the site for Fleadh Cheoil na hEireann, Ireland’s largest traditional music festival. Martin was chosen to become the first honorary president in the history of the Fleadh, flown home to Sligo and feted as a returning hero. Back in New York in January, 1990, he gave a memorable, sold-out concert performance at the Eagle Tavern with the support of Paddy Reynolds, Brian Conway and pianist Felix Dolan. In March of that same year, he was among 16 top Irish fiddlers in the US who were brought to Boston College for an all-star fiddle concert. He can be heard on the live recording of that concert, My Love is in America (Green Linnet records).

Not long after his triumphs in Sligo and Boston, failing health and the lingering effects of a mugging outside his Bronx apartment forced Martin into a nursing home, where he spent his remaining years. A lifelong bachelor, Martin is survived by his sister Bridget of Buffalo, New York, his nephew, Bill McCormick of Clearwater, Florida and by numerous other nieces and nephews in Ireland, Canada and the US.