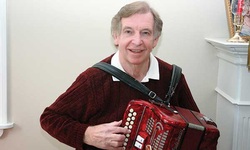 Accordionist Martin Mulhaire is yet another East Galway composer. There must be something in the water there!
His most famous tune is such a common tune we're sure many people think it is hundreds of years old The Golden Keyboard.


Other common tunes of his are Martin Mulhaire's #9, Carmel Mahoney Mulhaire and The Old Thatched House.

This biography comes from the Comhaltas archives

Martin Mulhaire was born in Eyrecourt County Galway, into a family steeped in traditional music.  His father Tommy played accordian, fiddle, flute, whistle and piano accordian.  Eyrecourt, in East Galway is a great stronghold of traditional music.  Martin started  playing the accordian at the age of twelve and won the All-Ireland at age seventeen.  At about this time, he started composing tunes, many of which are standard tunes today.  The Golden Keyboard and Carmel Mahoney Mulhaire’s, to name a few, have shown up on many records and tapes over the years.

Martin became known as an accordian player by his early records made for Gael-Linn (now out of print) and broadcast over Radio Eireann.  Martin also played with the Aughrim Slopes and Killimor Ceili bands.  In 1957 he was asked by Paddy Canney and P.J. Hayes to join the famous Tulla Ceili Band for a tour of England.  Later that year, they won the All Ireland Ceili Band Competition in Dungarven, Co Waterford.  The next stop for Martin and the Tulla Ceili Bank was New York City for St Patrick’s Day 1958.  They performed a concert in the world renown Carnegie Hall and released the first long play ceili record titled Echoes of Erin, featuring Martin playing The Yellow Tinker and the Sally Gardens.

After the band returned to Ireland Martin, and his wife Carmel, stayed in the USA and raised their family.  He learned to play the guitar as a hobby and for the next 20 years played lead guitar and accordian in one of the top show bands in New York.  Two of his daughters, Laura on piano and Sheila on the flute, were not sitting in and playing traditional music with him.  All three can be heard on Father’s and Daughter’s, an album released under the Shanachie Label and produced by Mick Maloney for the Ethnic Art Center.

In 1993 Martin along with fiddler and good friend Seamus Connelly, released a new CD titled Warming Up under Green Linnet records.  Also recording with Martin and Seamus is fellow Galway man Jack Coen on flute and native New Yorker Felix Dolan on piano.  Warming Up features seven solos of Martin’s own compositions and has been regarded as one of the purest traditional releases for some time.  It has been very well received both here in the United States and in Ireland.


There's a great article about Martin from Earle Hitchner in the Irish Echo below.

Soft-spoken and unpretentious, composer and button accordionist Martin Mulhaire is a consummate gentleman who shuns the spotlight. He also happens to be one of the most gifted, knowledgeable, thoughtful, perceptive, tasteful, open-minded, and fascinating musicians I’ve ever met.

Ezra Pound urged poets to “make it new.” Martin Mulhaire, who’s from Eyrecourt, East Galway, and resides in Pearl River, N.Y., did the opposite: he wrote tunes that wound up sounding magnificently old. And in doing so, he made them eternally fresh.

One test of a great new melody in Irish traditional music is whether it’s often presupposed a timeless classic. The tune is so beautifully structured, so appealing, so “right” that it simply must be from a master composer whose namelessness testifies to the tune’s age. At least, that’s the assumption, which was probably held by flutist Matt Molloy, fiddler Sean Keane, and guitarist Arty McGlynn when they recorded “The Golden Keyboard” reel on their brilliant 1985 album, “Contentment Is Wealth.” The tune, like every other on the release, carries no composer credit.

Martin Mulhaire wrote “The Golden Keyboard,” and musicians such as Joe Derrane, Bobby Gardiner, John Regan, Noel Hill and Tony Linnane, Kevin Henry, and Trian have also recorded it. In 1960 at Fleadh Cheoil na hEireann in Boyle, Roscommon, the New York Ceili Band performed it in competition. It was ironic that they used a tune by a former musician in the ceili band who won the coveted senior title that year: the Tulla.

“I was just looking for a name, a flashy title that could be easily remembered,” Mulhaire said of “The Golden Keyboard.” He obviously succeeded.

“I was always worried about composing tunes that I might have heard by someone else,” admitted 72-year-old Martin Mulhaire, a retired carpenter, about the approximately 20 enduring melodies he’s written. “You’re always influenced by whom you hear. I’ve been lucky that my own tunes have been well received and don’t sound as if they were written by the same person.”

Regarding the anonymity he often encountered as a composer, Mulhaire was philosophical. “In the beginning it didn’t bother me much because I wasn’t willing to confess that I had written the tunes. I wasn’t sure how good they were.”

Other musicians quickly applied the seal of excellence. Well over 70 albums feature one or more Mulhaire tunes. They include such bona fide classics as “Carmel Mahoney Mulhaire” (named after his Portumna wife of 52 years), “Grandpa Tommy’s Ceili Band” (named after his father), “The Old Thatched House” (the first tune he ever wrote), “Farewell to Eyrecourt” (covered most recently by the Kane Sisters on their “Side by Side” album), and “Mulhaire’s #9″ (played by Billy McComiskey on the 2009 album “Pride of New York”). Several Mulhaire tunes were also recorded by him with fiddler Seamus Connolly, flutist Jack Coen, and pianist Felix Dolan on “Warming Up,” their splendid 1993 album.

“I guess my being a composer has eclipsed my being a button accordionist now,” Mulhaire confessed to me. But that statement should be taken with a full shaker of salt.

He won an All-Ireland junior button accordion championship and, with his brother Brendan and father Tommy, an All-Ireland senior trio title. Martin’s skill as a button accordionist is apparent not only on the album “Warming Up” but also on “Fathers and Daughters” in 1986; on the greatest ceili band recording ever made, “Echoes of Erin,” by the Tulla Ceili Band in 1958; and on the deft but regrettably overlooked solo 78-rpm recordings he made shortly after “Echoes of Erin.” In addition, Mulhaire made recordings, seemingly lost now, for Ireland’s Gael-Linn label when he was about 16 years old.

Taken together, the extant recordings are impressive proof of his box-playing expertise over the years. On “Echoes of Erin,” for example, Mulhaire is accorded the sole solo track, “Cottage Groves / The Sally Gardens.” What’s obvious is that he is among the most accomplished button accordionists in the history of Irish traditional music.

What’s less obvious to traditional music buffs is his keen interest in the guitar. For many years Mulhaire was the lead electric guitarist in New York’s Majestic Showband, which he formed with Mattie Connolly, who also played electric guitar in the group but is more familiar to trad fans as a superb uilleann piper. In the U.S., where Martin remained after the Tulla Ceili Band’s tour in 1958, he bought an acoustic guitar, a Gibson J-200, and a chord book and began learning to play his new instrument.

Guitarists who influenced his playing include Newcastle-born Hank Marvin, possessing a distinctive twanging rock style in the Shadows, a band that also backed British teen idol Cliff Richard. “The Shadows’ number one hit in 1960 was ‘Apache,’ and it was pure Hank Marvin,” Mulhaire recalled fondly.

“A lot of people don’t believe me when I tell them that I saw a lot of these guitarists live,” Mulhaire added. “But I also never broadcast to traditional players that I was interested in that stuff. I was undercover.”

In May 1997 at Wolf Trap in Vienna, Va., the Tulla Ceili Band, who celebrated their golden anniversary the previous year, invited former members Martin Mulhaire and Mike Preston to join the ensemble at the Irish Folk Festival. Tulla fiddler Martin Hayes and Martin Mulhaire happened to be sitting near each other on a shuttle bus at the festival when Mulhaire mentioned that he liked the Allman Brothers. Hayes, perhaps undercover himself, replied, “I love the Allman Brothers.” He was as interested in rock and other genres of music as Mulhaire was. “We had a common ground that we never had before,” Mulhaire said.

The guitar gods truly smiled on Martin Mulhaire one day during the 1960s in New York City for what can be called his Jimi Hendrix Experience.

“I was in Manny’s Music Store, where I used to stop after work to see what was new in guitars, and I saw this guy in the corner with a big hat or sombrero with bells along the side of it, a leather jacket, and leather pants even though it was 90 degrees outside at the time,” Mulhaire recalled. “He was talking about guitars with Henry, who owned Manny’s, and he asked Henry to see a Stratocaster. He gets the Stratocaster, plugs in, and plays about five or six licks on it. It was unbelievable playing even when he was just tuning up. He had such command of the instrument. I knew who he was, and so I went up to talk with him for a couple of minutes. He gave me his autograph, which I later lost. I thought he was going to play some more, but he said, ‘I’m not going to play any more now. Concert’s over.’ Then he said to Henry, ‘Okay, I’ll take six of them.’ Jimi Hendrix walked out with a load of guitars.”

Scratch a trad player or critic, and who knows what else musically lies underneath. I told Martin Mulhaire about seeing by chance Altan’s Frankie Kennedy and Mairead Ni Mhaonaigh at a concert by one of my favorite electric guitarists, Roy Buchanan, at the Bottom Line in Greenwich Village. I also confessed to Martin that, to my ears, the closest an electric guitar ever came to crying on a studio recording was Roy Buchanan’s Telecaster tour de force in “Wayfairing Pilgrim” on his 1974 album “In the Beginning.” Martin understood exactly what I meant.

For the past decade he has been playing button accordion in the popular Pete Kelly Premier Ceili Band. “Some people go bowling; I go play ceilidhs,” Martin said. “We average 14 sets a night, which is five figures in each set. I kept track one evening: I played 120 tunes during a ceilidh. Playing an electric guitar is easy compared to that, although I’d probably get calluses in two minutes on the guitar now.”

Don’t believe it. I’d bet all my Roy Buchanan albums that Martin Mulhaire can still rock.