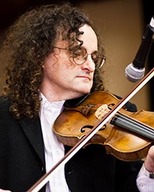 One of the most renowned living Irish musicians, fiddler Martin Hayes is primarily known for his unique interpretations of other people's music.

He has composed at least one tune, Maghera Mountain, which has entered the tradition and been recorded by people like Mary MacNamara, The Kane Sisters and Mícheál Ó Raghallaigh.


Below is his official biography

Martin Hayes’ unique sound, his mastery of his instrument, his acknowledgement of the past and his shaping of the future of the music, combine to create an astonishing and formidable artistic intelligence.

He is the recipient of several major awards, including Man of the Year from the American Irish
Historical Society; Folk Instrumentalist of the Year from BBC Radio; a National Entertainment Award (the Irish ‘Grammy’) six All-Ireland fiddle championships before the age of nineteen, and most recently the prestigious Gradam Ceoil, Musician of the Year 2008 from the Irish language television station TG 4.

Martin was also cited by the Irish Sunday Tribune as one of the hundred most influential Irish men and women in the fields of entertainment, politics and sports at the start of the new Millennium, as well as one of the most important musicians to come out of Ireland in the last fifty years.

He has drawn musical inspiration from sources as diverse as the Finnish composer Arvo
Pärt, Spanish viola da gamba master, Jordi Savall, and the jazz genius, John Coltrane,
but remains grounded in the music he grew up with in Maghera, Feakle, East Co.
Clare where the music learned from his father, P. Joe Hayes, profoundly influenced
his musical accent and ideas forever.

Recently he has composed scores for film, theatre, and modern dance, and has collaborated with jazz guitarist Bill Frisell, eclectic violinist Darol Anger and Irish composer David Flynn. These explorations present a challenge to any rigidity of thought and shed light on his fundamental artistic quest to go deeper within traditional Irish music and himself.