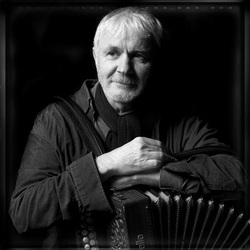 Máirtín O’Connor is one of the most respected and best loved musicians ever to emerge from Ireland.

One of the main musical forces behind the now legendary Riverdance phenomenon, through his work with De Dannan, Midnight Well and Skylark and also as a solo artist he has quite simply gone where no Irish accordion player had gone before.

Máirtín began playing the accordion at the age of nine, and his remarkable career has seen him as a member of many of traditional music's leading groups including, Midnight Well, De Dannan, The Boys of the Lough, and Skylark. His first solo album 'A Connachtman's Rambles' established him as a solo musician and proved a major critical success. The album remained in the British Folk charts for a considerable period. Máirtín's second solo album 'Perpetual Motion', released in 1990 is one of the best accordion albums ever produced by an Irish artist and displays his astounding skill, dexterity and versatility to the full. The release in 1993 of his 'Chatterbox' album gave further evidence of his outstanding technique, imagination and compositional talent.

Máirtín's infectious and irresistible style and constantly growing status has kept him very busy not only with live concerts but also as a session musician on recordings by many national and international musicians such as Rod Stewart, Elvis Costello, Mark Knofler, Tanita Tikaram, Townes Van Zandt, Chieftains, the Dubliners, Davy Spillane, Maire Brennan, the Waterboys…..

Máirtín also played on the very prestigious Paris Mussette (vol 2) as series of records chronicling the history of the mussette, featuring top French accordion players which is included in the Phonographic History of French accordion Music.. As a soloist he has performed with the RTE Concert Orchestra on Bill Whelan's Seville Suite and in 1995 he played a major role in Bill's world renowned 'Riverdance' . He has also worked on the music for Shakespeare's 'Twelfth Night' featuring Ben Kingsley and written by Shaun Davey, plus Bill Whelan's 'Some Mother's Son'.

Also in 1995 Máirtín became the first recipient of the Allied Irish Banks, Traditional Musician of the Year award at a ceremony in his home town of Galway. The award was to acknowledge the tremendous contribution made by Máirtín to traditional Irish Music and in particular accordion music.

The Road West' his fourth solo album features thirteen of his most recent compositions including the title track 'The Road West' Many of his compositions here draw from his traditional roots and he enlists the services of some of Irelands' finest and accomplished musicians, many of whom he has played with over the years and the result is one of his finest works to date.

In 2003 Máirtín was invited to compose some music for Dublin's St. Patrick's Festival fireworks display. Needless to say, he found this a wonderful challenge and having looked at the portfolio of the group F fireworks team, featuring their work around the world, he was stunned by the beauty, grandeur and complexity of their displays, his musical response to this is the Rain of Light Fireworks Suite. Also included on the recording are some other compositions of Máirtín's that match the spirit of the occasion.

Many fine musicians have played in Máirtín’s bands. For the past 9 years the group has included multi-all Ireland winner Cathal Hayden and former Dervish member Séamie O’Dowd with percussionist Jim Higgins joining them occasionally.

In 2009 the trio released the much anticipated album ‘Crossroads’.

A prolific writer of new material, Máirtín’s tunes can be heard on the recordings of many artists and at sessions throughout the world.

Following many years of requests for the sheet music of his tunes, Máirtín O’Connor has finally released a book containing 60 of his own compositions. Supported by the Arts Council and launched at NUIG where only a few months earlier Máirtín was conferred with an honorary doctorate for his contribution to traditional music.

In addition the book contains a wealth of photographs, some taken by Máirtín himself; stories and anecdotes about the origin of the music and several illustrations by Tony Corr and Joe Boske, lending a playful imagery to the some of the tunes. Boske also works his design magic on this project as he has done with many of O’Connor’s previous album releases.

The book encapsulates Máirtín O’Connor’s wonderful personality just as his music does yet in another medium. To be enjoyed by many - not just musicians…