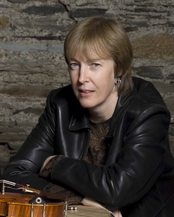 Liz Carroll is one of the leading living fiddle players. Liz has created a large body of tunes in traditional Irish music styles. The tunes often reflect her own virtuoso fiddle style.

Several of her tunes are now part of the traditional music repertoire having been recorded by other musicians and some are widely played in sessions. These include The Diplodocus, Lost in the Loop, Lizzy in the Low Ground, The Chandeleir and Wissahickon Drive.

These tunes and many more are found in the tunebook Liz Carroll Collected, published in 2010.

The following information was taken from her website www.lizcarroll.com

Liz Carroll was born in Chicago of Irish parents. She's a junior and senior All-Ireland Fiddle Champion, and has toured as a solo artist and with the Greenfields of America, Trian, String Sisters, and as part of the duo Liz Carroll & John Doyle. She's featured on nine albums and has appeared on many more, and in 2009 she became the first Irish-American musician nominated for a Grammy. In addition, Liz is a recipient of the National Heritage Fellowship Award (1994).

On St. Patrick’s Day 2009, Liz travelled to Washington, D.C., to play for fellow Chicagoan, President Obama, at the annual St. Patrick’s Day luncheon. In 2005, she became a member of String Sisters, a sextet of fiddlers from America, Ireland, the Shetland Islands and Norway. Their 2009 Live album was shortlisted for a Grammy. And Liz’s first duet album with John Doyle, In Play, caused Sing Out! Magazine’s Rob Weir to exclaim “Liz Carroll recordings induce joy and admiration that exhaust this reviewer's feeble descriptors."

Previous to that were two solo albums, Lake Effect and Lost in the Loop, which used Liz’s hometown of Chicago as the influence for an extraordinary outpouring of new compositions. The 2000 Lost in the Loop albumled the Irish Echo to proclaim her the Traditional Musician of the Year.

All that has come this century, but in the last came a National Heritage Award Fellowship in 1994, which honored Liz as a "Master Traditional Artist who has contributed to the shaping of our artistic traditions and to preserving the cultural diversity of the United States." A mouthful, to be sure, but such national recognition stood on her winning the 1975 All-Ireland Senior Fiddle Championship to Mayor Daley proclaiming September 18, 1999 as “Liz Carroll Day” in Chicago.

The coming decade looks to be as active as the last. 2010 brought the publication of Liz’s first book of compositions, “Collected.” It’s a compilation of Liz’s musical past, as well as a promise for the future - a past and future honored just this year with Ireland's most revered traditional music prize, the Cumadóir TG4 (Composer of the Year!).