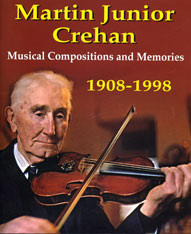 Clare born fiddler, singer and composer Junior Crehan was a real character and one of the most important 20th Century Clare musicians. He was named Clareman of the Year in 1989.

Many of his tunes are now widely played and are collected in the book Musical Compositions and Memories. This book features 20 tunes in all, as well as the lyrics to 9 songs which he composed to old airs.

The tune list may be small but the quality of the tunes is high. His most commonly played tunes include The Mist Covered Mountain, The Otter's Holt, The Luachrachán's Jig, The Hills of Coore, Farewell to Milltown Malbay and the beautifully named Her Golden Hair Was Running Down Her Back.

A full list of his compositions can be viewed here.

You can read an article about Junior written by Brendan Taaffe here.

A comprehensive 2 CD set of his music and stories has been released called The Last House in Ballmakea. It can be purchased here

Prior to the release of that recording Junior Crehan was featured on the following compilations.