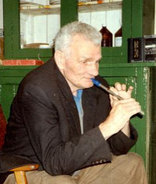 Josie McDermott was a flute and whistle player from Roscommon.

He's another composer who has some very commonly played tunes yet he goes largely unrecognised nowadays outside of the flute/whistle fraternity.

His best known tunes include Darby's Farewell to London, Father O'Grady's Visit To Boca and The Trip to Birmingham.

Josie Mc Dermott lived all of his life in the townland of Coolmine outside the town of Ballyfarnan, Co. Roscommon. The townland itself is in Co. Sligo, and only a few miles from Co. Leitrim, an area steeped in folklore and traditions, where famous musicians seemed to come out of the woodwork - Coleman, Morrison, Killoran, John McKenna, Horan, Finn, Duignan etc. The last bard, blind harper Turlough O’Carolan, is buried nearby. Josie used to visit the local house dances and was taught music by James Flynn, a fine local fiddler. Later he travelled with his whistle, fife and flute and played at many a session or dance throughout the countryside.

While Traditional Music was his first love, his interests were much broader. He sang in a modern band for a while as a youngster and later joined various combinations playing saxophone and trumpet. He would equally listen to and praise country and western music, jazz, and ceilí. In 1962 he contracted severe eczema and lost his sight. He never lost heart though. He continued playing both in a ceilí and a modern dance band. In 1964, he won the All-Ireland on the Whistle and Miscellaneous instruments on the saxophone! He also won the flute award, lilting and had success at the ballad singing. He had a great love for traditional ballads and continued to expand his repertoire by composing some himself. Josie a bachelor with no close relatives, died in 1992 and is sadly missed by his wonderful neighbours and legions of musical friends. This great balladeer, composer, musician and singer is commemorated annually at a memorial festival in Ballyfarnan.

His Music His musical style is somewhat staccato but haunting to the ear. He had an unusual ‘tonguing’ technique, so that in later years he could play rolls with the fingers and triplets with the tongue. Besides his interest in O’Carolan’s music, he could interpret the slow airs faultlessly because of his own knowledge of the songs. He composed various tunes including ‘Darby’s Farewell to London’ which gave its name to the LP he made. Characters and local events gave him inspiration to write ballads such as “The Boatman of Lough Key” and “Ballad of O’Carolan Country”. He also entered the field of play writing, plays of music song and humour; one of his tabloids was presented at the O’Carolan festival in Keadue. His former pupils played the air “Máire Dall”, which he had harmonically arranged, at his funeral mass.