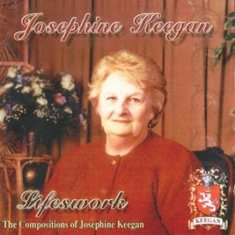 Primarily known for being Seán Maguire's pianist, Josephine Keegan is also a prolific composer and was named TG4 Composer of the Year in 2005.

Few of her tunes have yet to enter the standard repertoire. Perhaps her best known tune and now a common session tune, is The Curlew as recorded by Altan.

The Gates Of Mullagh and Clear the Decks are two more tunes that have been recorded multiple times.

These tunes can be found in the extensive recording

Lifeswork: The Compositions of Josephine Keegan

Josephine Keegan was born of Irish parents in Dundee, Scotland in 1935 and at the age of four came to live with her family in South Armagh. She began to play piano and fiddle when she was about six, being taught by both parents at home and later took formal lessons. Josephine studied classical music on both instruments as well as playing traditional music and won many prizes at competitions throughout Ireland. She won a gold medal at the Feis Ceoil in Dublin and later won the gold medal at the All-Ireland Fiddle Championship at the Oireachtas in 1955.

After that fiddle playing took a back seat and she concentrated on being a piano accompanist to other musicians, including Joe Burke and Seán Magure.  She recorded her first of five solo albums in 1976 and in 2006, after a gap of twenty five years she recorded a new solo album.  Josephine is known as a great musician, a collector and a composer of tunes.

In 2003 Josephine received a special award at Boston College in appreciation of her life-long dedication to our music and her invaluable contribution to Irish Cultural preservation.