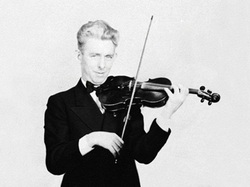 A man almost forgotten until fairly recently when his nephew Vincent controversially claimed Mayo man John McGrath as the composer of many tunes recorded by US- based Irish musicians in the 1920's-1930's.

He is alleged to have composed tunes including The Providence Reel, Andy McGann's, The Old Dudeen and The Bride's Favourite.

McGrath was certainly very active as a musician during the heady days when Michael Coleman, Paddy Killoran and Lad O'Beirne were recording and his acquaintance with these musicians, coupled with the fact that he notated many of these previously undocumented tunes, has led some to suggest he was the composer of them.

The authenticity of these claims is somewhat tarnished by the fact that many of the tunes he notated were cetainly not composed by him.

We recently received correspondence from a former student of John's who refutes the fact that John was a composer of any of the tunes that are mentioned and instead claims that he composed just one tune! (We are keeping the former student's name anonymous for confidentiality reasons).

'I was a student of John's. At one point I asked John directly if he had ever composed any tunes. He said he had composed one - but it wasn't very good but it was hard to play (typical John.) John's nephew has been on a crusade to credit John with all kinds of tunes. For example he claims that John composed Cooley's reel. John learned it from me, and I learned it from Joe Cooley.''

We'll probably never know for sure how many tunes John McGrath actually composed, it is possible he was just a modest man who wouldn't claim he was the composer of tunes that are credited to him and have no other identifiable origin.

Nevertheless. the people of Mayo have certainly embraced him as their great composing son, as this excerpt from an article in the Mayo News testifies!

'A study of the 78 rpm record recordings from the late 1920s will reveal a substantial body of music not previously recorded nor to be found in the dance music collections of the time, e.g. O’Neill’s Music of Ireland and the Roche Collection of Traditional Irish Music.
The conventional wisdom is that these new tunes were largely the creations of the performers – despite the obvious similarities and patterns in the tunes that point in the direction of a single composer. However, there is strong evidence that the Sligo fiddle masters who dominated the 78 rpm recording era, namely Michael Coleman, James Morrison, Paddy Killoran and Paddy Sweeney, did not compose music and that several of the classic dance tunes of that period can, in fact, be reliably attributed to John McGrath from Rossport in Co Mayo, who dedicated his life to the promotion of Irish music from the time of his arrival in New York in 1928 until his death there in 1955.'