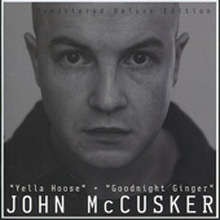 John McCusker is a prodigiously talented fiddler and composer from Scotland.

He has been one of the leading musicians on the Scottish traditional music scene since joining the Battlefield Band in his early 20's.

He has also crossed over into the Irish scene, performing regularly with musicians such as John Doyle and Michael McGoldrick, the latter of whom he tours with in the Mark Knopfler band.

John has composed a lot of music, including an ambitious suite called Under the One Sky.
There is a book of his music called Bothwell Boy Music of John McCusker.

Some of his tunes can be commonly heard in Irish sessions, most particularly Frank's Reel which has been recorded many times by musicians across the spectrum of 'Celtic' music.

Irish musicians to record it include the band Solas: Michelle O Brien, Aogan Lynch And Gavin Ralston; and Liz Doherty with Fiddlesticks.

More details about John can be found on his website http://www.johnmccusker.co.uk/