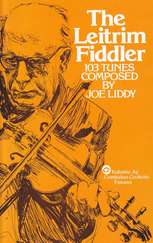 Leitrim multi-instrumentalist Joe Liddy composed over 100 tunes which were published in 1981 by Comhaltas Ceoltoirí Eireann in the book Joe Liddy - The Leitrim Fiddler.

This collection reveals Liddy as an inventive composer with his own distinctive style. Whilst the majority of his tunes are either undiscovered or played in small circles, there are a few tunes which have been recorded several times and as such are in general circulation in the tradition. These tunes include Palmer's Gate, The Red Bee
and The Kilcloon.

The following biography of Joe comes from an edition of Comhaltas' Treoir Magazine.

Born in Killargue, Co. Leitrim in 1906, Joe came from a family steeped in the rich musical
traditions of that part of the country. His mother and father were fine accordion players as
were his brothers, Mick and Tom. His sister Annie played both accordion and fiddle, and his sister Kathleen was a noted step-dancer.

Joe began playing the melodeon at a young age, before progressing to the accordion, and from that to his favourite instrument, the fiddle. Joe joined An Garda Siochana in 1924, just before his brother Tom emigrated to America. When Tom returned to Ireland in the early 1930S, Joe, Tom and Westmeath uilleann piper, Ned O'Gorman got together to form the Belhavel Trio, named after Belhavel Lough in Co. Leitrim. Over the next ten years, they made three 78 records and also made numerous broadcasts on Raidio Eireann, during the 1940S and early 50S. Joe also played with John Joe Gardiner and Kathleen Harrington in the Kincora Ceili Band.

Joe became very active in the Booterstown, and later the Monkstown branch of Comhaltas
Ceolt6iri Eireann in the 1960s and 70S. Over many years of both playing and teaching, he had composed very many traditional Irish tunes. In 1981, Comhaltas Ceolt6iri Eireann published over a hundred of his tunes in a 2-volume book
entitled 'The Leitrim Fiddler'.