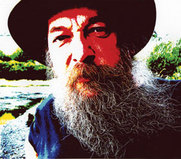 Born in Germany but living in Ireland for 40 years, Joe Boske is a well known figure on the Galway traditional music scene, primarily for his artwork.

He has designed album covers for numerous artists including Mairtín O'Connor and De Danann.

He is also a tune composer and there is a CD called Amara dedicated to his tunes. It was recorded in 1997 and features a rake of top trad players including Mairtín O'Connor, Davy Spillane and Charlie Piggot.

As yet his tunes haven't made an impact on the general tradition.

Film maker Art O'Briain made a documentary about Joe called Too Late For The Early House.