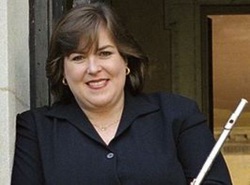 Joanie Madden, the charismatic leader of the US based all-female traditional band Cherish the Ladies, is also a prolific tune composer.

Her jig composition The Cat's Meow is now a ubiquitous session tune that has been recorded over 20 times. As far as we can tell none of her other tunes are widely played.

This is Joanie's official biography from the Cherish the Ladies website.

JOANIE MADDEN is the Grammy Award winning whistle and flute player who has been the leader of Cherish the Ladies since its inception. Born in New York of Irish parents, she is the second oldest of seven children raised in a musical household; her mother Helen, a dancer of traditional sets hails from Miltown Malbay, County Clare and her father Joe, an All-Ireland Champion on the accordion, comes from Portumna in East Galway. Joanie received her musical training early in life listening to her father and his friends play music at family gatherings and social events. She began taking lessons from Jack Coen, and within a few short years she had won both the world Championship on the concert flute and whistle. During that time, Joanie also became the first American to win the coveted Senior All-Ireland Championship on the whistle.

She has amassed a plethora of awards and citations to her credit including; the youngest member inducted into both the Irish-American Musicians Hall of Fame and the Comhaltas Ceoltoiri Hall of Fame, recipient of the Wild Geese Award, voted twice as one of the Top 100 Irish-Americans in the United States and named Traditional Musician of the Year, all for her contributions to promoting and preserving Irish culture in America. In 2010, Joanie was forever immortalized on the streets of her native Bronx when she had a street named after her on the Grand Concourse; ?Joanie Madden and Cherish the Ladies and in 2011, she was bestowed one of the nations highest awards as she was chosen for the Ellis Island Medal of Honor where she joins an exclusive list of distinguished American citizens with great accomplishments including six United State Presidents, Ambassadors, Senators, Congressman and Supreme Court judges.

Joanie is in constant demand as a studio musician and has performed on over a hundred albums running the gamut from Pete Seeger to Sinead O'Connor. Joanie has played on three Grammy award-winning albums and her involvement on the Hearts of Space labels’ “Celtic Twilight” CD led to a platinum album with over 1,000,000 sales. In the past year she has toured with the Eagles’ Don Henley and was also a featured soloist on the final Lord of the Rings soundtrack.

She is in constant demand as a studio musician and has performed on over a hundred albums running the gamut from Pete Seeger to Sinead O'Connor. Joanie has played on three Grammy award-winning albums and her involvement on the Celtiic Twilight CD led to a platinum album with over 1,000,000 sales. In the past years she has toured with the Eagles Don Henley and was also a featured soloist on the final Lord of the Rings soundtrack.

In addition to her musical virtuosity, she is a gifted composer. Many of her compositions are basic session tunes known throughout the world in traditional music circles and have been recorded by some of Irelands' leading musicians.

She is equally loved for her outgoing personality and her stage persona and has been heralded by critics around the globe for her role as front woman for Cherish the Ladies. Noted folklorist, musician and scholar Dr. Mick Moloney calls Joanie "a character - one of the greatest you could meet in a long days travel" and presented her with the title the "First lady of Irish Music".

She is the top selling whistle player in history having sold over 400,000 solo albums. In addition to the fifteen albums Joanie has recorded, arranged and produced for Cherish the Ladies, she has recorded three highly successful solo albums; "A Whistle on the Wind", "Song of the Irish Whistle" and "Song of the Irish Whistle 2" and a fabulous quartet album she recorded with Billy McComiskey, Brian Conway and Brendan Dolan called "The Pride of New York".