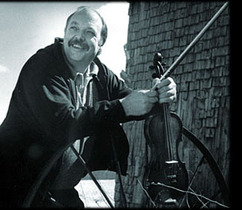 Jerry Holland was one of the great figures of Cape Breton music. Whilst he will mostly be remembered as a great exponent of Cape Breton fiddle music, he composed many tunes, some of which have entered the Irish tradition, most particularly Brenda Stubbert's Reel.

He was born in Brockton, Massachusetts, United States to Canadian parents - his father was from New Brunswick and his mother was from Quebec. During his childhood, Jerry was exposed to the music of the large Cape Breton expatriate community in Boston. He began to play the fiddle and step-dance at the age of five, and played at his first square dance at the age of six. He made his television debut in 1962 on the Canadian program Don Messer's Jubilee. By the time he was ten years old, he was playing regularly at dances in the Boston area. Jerry's family made annual summer trips to Cape Breton, and Jerry moved there permanently in 1975.

In his early 20s, Jerry performed with the Cape Breton Symphony, a group of fiddlers that included Winston "Scotty" Fitzgerald, Angus Chisholm, Joe Cormier, Wilfred Gillis and John Donald Cameron. The group appeared regularly on CBC television on The John Allan Cameron Show and other programs. From playing with these much older and more experienced musicians, Jerry gained an appreciation for the traditional style of Cape Breton fiddle music, as well as a repertoire of over a thousand fiddle tunes.

Jerry released thirteen albums and appeared as a guest musician on over 25 more. He published two collections of fiddle tunes: Jerry Holland's Collection of Fiddle Tunes and Jerry Holland's Second Collection of Fiddle Tunes, both edited by Paul Cranford. He was also noted as a composer of fiddle tunes, most famously "Brenda Stubbert's Reel" (named for his friend and fellow Cape Breton fiddler Brenda Stubbert) and "My Cape Breton Home".