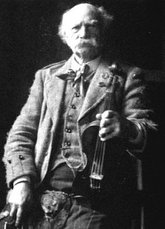 Though he was Scottish, the great fiddler James 'Scott' Skinner had a strong influence on many Irish musicians and as a result some of his compositions are now part of the Irish tradition having been recorded by well known musicians and played in sessions.

These include The Baker, The Laird Of Drumblair, The Spey in Spate, The Mathematician and The Left-Handed Fiddler.

James Skinner was born in Arbeadie village, in the parish of Banchory-Ternan, Aberdeenshire, on the 5th August 1843. His father William Skinner, a dance teacher, had been a gardener until a shotgun (fired as part of wedding celebrations) took off three fingers of his left hand. After his accident, he learned to play his fiddle by holding the bow (instead of the fiddle), with his damaged left hand. James’s mother Mary Agnew came from Strathdon, Aberdeenshire. James was the youngest of six children.

William Skinner died in 1845. Seven years later, Mary Skinner remarried, so James moved to Aberdeen, where he lived with his sister Annie and attended Connell’s School.

Early days with a cello Alexander Forbes Skinner (1833–1883) taught his young brother James to play tunes on the violin, and to ‘vamp’, or play a bass line on the cello. By the time he was eight, James was playing the cello at dances with local fiddler Peter Milne (1824–1908), who came from Kincardine o’ Neill, Aberdeenshire.

As there were no village halls, dances were usually held in barns. Young James often had to trudge many miles to play at these dances. For this, Peter Milne paid him five shillings (25p) a month.

Dr Mark’s Little Men In 1855, ‘Dr Mark’s Little Men’, a boys’ touring group, visited Aberdeen. Sandy arranged for James to audition with them. James, by now aged eleven, signed up for a six-year apprenticeship (on cello and violin). The boys, who were based in Manchester, performed throughout Britain. In return, Dr Mark fed, clothed, and educated them.

James in Manchester Dr Mark taught the boys to play from memory – which is exactly how James had learned to play in the first place. They had lessons in the morning and again in the afternoon. Every afternoon and evening, they performed in concerts. Dr Mark was a liberal master – he gave the boys an hour’s play in the morning and again in the afternoon, another hour for dinner and an hour for tea. He believed that a musical education encouraged a happy family life. Dr Mark received no public money to provide for the boys. He reckoned that in ten years he had spent £30,000 – a huge sum by today’s standards. He was committed to the ideal of setting up a national music school for talented children.

James, known as ‘Jamie’ or ‘the kilted boy’, was not always happy and at one point was sent home from a tour for fighting. Musically, this was probably the best thing that could have happened to him. Back in Manchester, Charles Rougier, a French violinist who played with the new Hallé Orchestra, gave him violin lessons. Rougier realized that James could not read music, so set about rectifying this. Rougier’s teaching was so good that in later years, James credited him for his success as a composer and performer.

Dancer and Dancing-Master James left Dr Mark’s Little Men in 1861, shortly before his apprenticeship was due to finish, and returned to Aberdeen. After some months touring with the New Orleans Theatre Company, he took a course of dancing lessons from ‘Professor’ William Scott, who lived at Stoneywood, near Aberdeen. They got on so well that James adopted ‘Scott’ as part of his professional name, calling himself J. Scott Skinner.

In 1862 he took part in Highland dancing competitions in Ireland. He won first prize in a Sword Dance competition, accompanying himself on the fiddle, and beating John McNeill, an acknowledged champion. The following year he won a violin competition in Inverness.

That same year, he became a professional dancing-master. He held his first classes at Strathdon, Aberdeenshire. His growing reputation eventually led to work at Balmoral Castle, Queen Victoria’s Scottish retreat, where he taught dancing to more than 100 tenants and children.

He married his first wife, Jean Stewart, from Aberlour, Moray, in 1871, the year that their daughter Jeanie was born. A son, Manson, arrived in 1881. The family moved to Elgin, and expanded their dancing schools, spending weeks at a time in different towns. Their business soon covered most of the North of Scotland, including Forres, Nairn, Inverness, Dingwall, Invergordon, Tain, and Wick, all accessible by rail.

Some of Skinner’s teaching methods were timeless. One pupil noted that Skinner had a short temper. He said that Skinner would rap a pupil who got steps wrong on the head with his bow, regardless of how much that pupil had paid for lessons. This was a trait that most dancing masters had in common!

Compositions and Catastrophe James’s first published composition, ‘Highland Polka’ appeared in a magazine when he was only 17. It was the first of more than 600 compositions to reach print, many of which he published himself. After this, longer works appeared:

He also published some compositions as sets of sheet music:

The Elgin Collection (1884) was an ambitious undertaking and may have had serious implications for him: by the following year he was bankrupt, owing more that £150. The cost of publishing the Elgin Collection may have contributed to his bankruptcy. As a result, his wife Jean was sent to the Elgin Asylum, suffering from nervous exhaustion brought on by poverty. She never recovered, and died in the Asylum on 5th January 1899, aged 58.

Changes In the meantime, Jeanie continued to help her father run his dancing classes as she had done for some years. Madame de Lenglée, Sandy Skinner’s widow, who was also a dance teacher, joined them.

Gertrude left him in 1909, and went back to Rhodesia where she had previously lived. Manson also emigrated: to Sydney, Australia. He returned to Europe during the First World War, to serve in France with the Australian army.

‘Aye the Kilt’ By the 1870s, Skinner was giving concerts all over the North-east of Scotland. The programmes normally included some of his own compositions as well as virtuoso violin solos by such composers as Paganini, or his old teacher, Charles Rougier.

In 1893 he joined a tour of the United States and Canada with the well-known piper and champion Highland Dancer, Willie MacLennan. MacLennan died suddenly of meningitis, and the tour flopped. The company had to ask certain wealthy, expatriate Scots for help to get back to Scotland. On his return, Skinner decided to adopt Highland dress, both on and off the stage. He decided to give up dance and to devote his remaining years to performing and composing.

Fame spreads Skinner made his first recording in Glasgow, in 1899. He was one of the very first Scottish artists to be recorded. By 1905, he had embarked on a recording career, which lasted until 1922. In this way, his music spread worldwide. During this time, he continued to perform in concerts throughout Scotland. In 1911, at Sir Harry Lauder’s suggestion, he formed ‘The Caledonian Four’ who performed in that year at the opening of the London Palladium.

In 1917 his portrait, (now in the McManus Galleries, Dundee), was painted by the artist J. Young Hunter. It was publicly presented to him at a ceremony at the Music Hall, Edinburgh. Six years later, his autobiography, ‘My Life and Adventures’, was serialized in the People’s Journal.

A Real Home at last In 1922 he bought his first (and only) house at 25 Victoria Street, Aberdeen, where he lived with his housekeeper, Mrs Lily Richards. Four years later, he was invited to take part in a fiddle competition in the United States. He went, but unhappy with the competition rules, refused to take part. He returned to Aberdeen, where he died the following year, on 17 March 1927.
His many friends and admirers raised a subscription for a marble memorial at his grave in Allenvale Cemetery, Aberdeen. This was unveiled in 1931 by Sir Harry Lauder, an old friend. The memorial includes a bronze bust of Skinner, a violin, and some bars from one of his most famous compositions, ‘The Bonnie Lass o’ Bon Accord’.