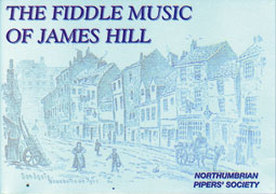 James Hill was a Scottish born fiddler and composer with a particular fondness for composing hornpipes.

He is credited with composing several tunes which are now part of the Irish tradition including The Scholar, The Rights of Man and The Golden Eagle. His authorship of the last two tunes is disputed.

Below is a biography from Wikipedia

James Hill (c.1811-1853) was a British fiddler-composer and publican who lived in Newcastle and Gateshead for most or all of his short life. He is famous as the composer of many fine common-time hornpipes for fiddle, including The High Level Bridge, The Beeswing, The Hawk and The Omnibus. He was sufficiently well-known that many other tunes by others, such as Blaydon Flats, were also mistakenly attributed to him.

He was of much more than local importance. The Newcastle style of hornpipe, of which he was the best-known exponent, became the model for many later 19th century examples. Many of his tunes, particularly The High Level Bridge and The Beeswing became well-known wherever hornpipes were played - both of these were published in Ryan's Mammoth Collection, which was first published in Boston in 1884.

A book, The Lads like Beer, published by Graham Dixon of Wallace Music, contained all his known tunes, but is now out of print. The Fiddle Music of James Hill, (ISBN 0-902510-27-4), a collection of Hill's compositions and other tunes, transposed into keys suitable for Northumbrian smallpipes, has recently been published by the Northumbrian Pipers' Society. Some of the early manuscript sources for his music may be viewed in facsimile on the FARNE archive