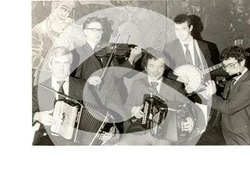 Eddie Kelly is the fiddler on the top left
Another East Galway composer, Eddie Kelly's most famous tune is a haunting reel simply titled Eddie Kelly's. It has been recorded by numerous musicians including Liz Carroll, Kevin and Seamus Glackin on their Northern Lights album and separately by Paddy Glackin and Jolyon Jackson.

Eddie Kelly was born in Meelick, Eyrecourt, near Ballinisloe, Co. Galway, in 1933. He lived in that area till 1958, then moved to Castlerea, Co. Roscommon. He has composed around 20 tunes.

He plays both button accordion and fiddle. His compositions often exhibit a strong East Galway influence. A respected traditional musician, his tunes circulated through sessions, radio performances, and concerts.

The Meelick Team Jig commemorates a hurling team from his native parish which qualified for and played in the first All-Ireland Hurling Finals held in 1884." Other titles include: