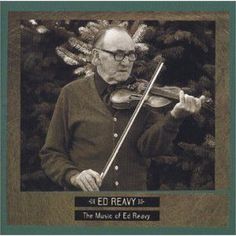 Ed Reavy was one of the greatest composers of traditional Irish music. His tunes are heard wherever there is Irish music. His most commonly played tunes include Maudabawn Chapel, Never was Piping so Gay, The House of Hamill, In Memory of Coleman, The Dances at Kinvara, The Hunters House and Love at the Endings.

The following biography was written by Dr. Mick Moloney as a foreward to to book The Collected Compositions of Ed Reavy.


No composer of traditional dance tunes in the history of Irish music has ever had his music adopted and played as widely as Ed. He devoted much of his life to the creation of a vast body of compelling, finely crafted tunes leaving an indelible imprint on the beautiful old tradition that was always his first love.
Ed Reavy was born in the village of Barnagrove in the County Cavan in the year 1897. He came with his parents to Philadelphia in the year 1912, and with the exception of two visits home to Ireland - one of nine months in 1922 and the other of three weeks in 1969 - lived the rest of his life in Philadelphia until his death in 1988.

By the time he was ten years old he had already developed a great love for Irish traditional music. There was music in the community he came from and there was also music in the family. His mother had cousins by the name of Lennon who lived in County Monaghan. They were seven brothers, all stonemasons, and they were great fiddle players. The Reavy's own house was a popular location for sessions. They owned a big barn where the local musicians used to congregate for sprees - music and dancing. He took to America with him vivid recollections of these evenings of merrymaking and those memories were always to stay with and inspire him.

Ed served complete apprenticeships first to the machinists' and then to the plumbing trade. He became a Master plumber and conducted his own successful business for the rest of his working life. He married and settled in Philadelphia and raised a family of six children. He became an excellent fiddler and made a classic recording forthe Victor company in Camden New Jersey in 1927 of two reels: 'The Boys of the Lough' and 'Tom Clark's Fancy' and two hornpipes: 'The Donegal' and 'The Cliff'. [Victor 21593B (42483)]

He began composing in the 1930s and continued creating new tunes up to the late 1960s. His sons estimate that he might have composed as many as five hundred tunes though only about 130 have been saved for publication. 'The Hunters' House', Ed's most popular composition, is almost certain to be played in any session of Irish music anywhere in the world from Sydney, Australia to Miltown Malbay, Co Clare.

Ed's tunes came to him in moments of reflection. He had to be in a certain mood before he could even start. These 'moods' could come on anytime, day or night, but they were most likely to occur if he was in regular contact with other musicians. He would ponder frequently on Ireland, his own childhood there and the country's problems: "The trials and tribulations that the Irish people went through in the past 750 years, all that enters into music . . . naturally it shows up in places. That's why in so many of the slow airs there's so much sadness and even in jigs and reels there's so much there that reminds you of the trials and tribulations we've been through."

Unlike most composers of the past, Ed's music achieved widespread recognition and popularity in his own lifetime; a process facilitated by increased travel communication between America and Ireland and the expanding technology of sound reproduction. The recognition began as soon as he started to compose when other musicians became captivated instantly by his tunes.

Over the years Ed played his compositions for hundreds of other Irish musicians in Philadelphia and New York. In addition he was President of the Irish Musicians' Association of America, an Organization founded in 1956. The Association had annual conventions in cities such as St. Louis, Cleveland, Chicago, Philadelphia and New York, which enabled Ed to become acquainted with a wide range of Irish musicians who lived elsewhere in America. Many players liked his tunes, learned them and subsequently brought them back to their home cities and to Ireland, where they caught on as well.

A prime figure in the dissemination of his tunes was Armaghman Louis Quinn from New York. Louis was a noted fiddle player, a prominent figure in Irish music organizations and a close friend of Ed's. Louis would travel to Ireland regularly bringing with him tapes of tunes popular among the Irish musicians in America, which he copied for many prominent musicians in Ireland and also performed, on Radio Eireann.

This material included many of Ed's compositions. Over the years several of these tunes were recorded by musicians in Ireland and went into aural circulation in traditional music circles. Many of the tunes at that time were unnamed and known by musicians simply as "Reavy's tunes." Frequently they circulated without any given title at all. As one would expect, Ed was extremely pleased to see his tunes being played so widely. "The transmission of tunes" he said, "is like telling a story", as far as change and variation from one musician to another is concerned. "Fortunately enough, most of the tunes were played much as I would like them played."

Ed's son Joe was the single biggest force in the popularization of his father's music. Beginning in the 1960s, Joe began painstakingly to notate his father's compositions. Many of them had been stored on homemade 78-rpm recordings, which Ed had recorded in his home or in the home of his good friend, Roscommon fiddler Tommy Caulfield. Others were simply in his head. Joe transcribed and helped his father name many of the tunes, which to that point had remained untitled. The first collection of Ed's music "Where the Shannon Rises" was printed in a limited edition and became a collector's item in double-quick time. It brought Ed's music to a wide audience and facilitated the learning of his tunes.

Certain stylistic features are characteristic of much of Ed's work, for example, his liberal use of "accidentals", his use of the full range of the fiddle, and his occasional utilization of keys, such as 'G' minor, 'D' minor and 'F' major - keys used comparatively rarely in Irish dance music.

Many of the compositions are what the great Washington fiddler Brendan Mulvihill calls "paradise tunes" for fiddlers. Of course the fact that Ed was a fiddler himself made his tunes particularly suited to that instrument.

Ultimately, the success of a composer in Irish traditional music, as in other musical idioms, is measured by the extent to which the tune maker's compositions are adopted by other traditional musicians. In the final analysis it is musicians who decide what deserves to be accommodated and what should be set aside. And by playing and recreating Ed's music they have spoken eloquently of the value compositions. It is the ultimate peer affirmation.

The great Chicago fiddler Liz Carroll, who selected hornpipe "The Lone Bush" for one of her tune selections when she won the Junior All Ireland fiddle competition feels that each of Ed's compositions represents a complete artistic statement. "You wouldn't want to add anything to the tunes and you wouldn't want to take anything from them" she says. "They are simply perfect."

The great Baltimore accordion player Billy McComisky feels that all of Ed's tunes are quite unique, suggesting his genius didn't follow any fixed formula. "I often heard a tune that I liked and wanted to learn and was amazed to find out later that Ed had composed it. It seemed so unlike other tunes of his that I already had heard."

Ed passed away in 1989 at the great age of 90 but his music is still a vital part of the lives of those who know and Ioved him. His funeral took place on a bitterly cold January day in Drexel Hill, just west of Philadelphia. Derry fiddler Eugene O'Donnell and myself played for the services in the church and the great young musician Seamus Egan, who grew nearby Lansdowne was to play the Uilleann pipes at graveside. The pipe reeds wouldn't work in the cold so Seamus played the tin whistle instead; his hands coverbyblack gloves with the fingertips cut off to enable him to play. He played a lament for Ed at the graveside - one of Ed's own slow airs. With the steam rising from the cold steel of the whistle and the haunting lonesome sound rising into the cold grey Pennsylvania sky, the scene embodied in one unforgettable moment the continuity of Irish music in America. Poet Michael Doyle captured the spirit of it a poem he wrote dramatizing the symbolism of the event.