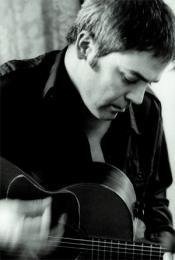 Donogh Hennessy is best known as the former guitarist in Lúnasa.

It is through Lúnasa that some of Hennessy's compositions have become known and they are often played by the younger generation of traditional musicians.

He left Lúnasa a few years ago and now mainly works with singers such as Susan McKeown and Pauline Scanlan.

Donogh Hennessy was born in Dublin. He started playing guitar at about the age of 14. However it wasn’t till he moved to Dingle in west Kerry at 17 that he first started to listen to Irish traditional music. In no time he was hooked and playing sessions 7 nights a week and spending his days learning and writing tunes on the tinwhistle. He moved to Galway 7 years later where he befriended Sharon Shannon, who asked him to join her band. The bass player in the group at the time was Trevor Hutchinson with whom he founded the group Lúnasa.

He has also recorded, co-written and produced both songs and tunes with several other artists.