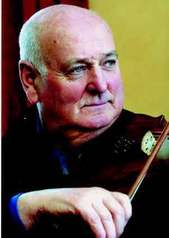 A hugely popular character in Donegal, Dinny McLaughlin has been hugely influential on the North Donegal music scene having taught numerous fiddlers including Ciaran Tourish and Liz Doherty.

Doherty has recorded some of his tunes including The Jinkin' Mermaid and The Gally Canter.


The following biography comes from http://www.donegalfiddlemusic.ie/dinnymclaughlin.htm

Dinny McLaughlin was born in 1935, in Shandrum near Buncrana in Inishowen, North East Donegal. At the time when Dinny was a boy “big nights” in houses were the main social events, as was the case all over Donegal. People would gather in a house and there would be music, dancing and singing often until morning. There was an interest in music in Dinny's house and as a young lad he experienced nights like these.

Dinny was interested in the fiddle from a young age, though he was fourteen years old before he got a fiddle of his own. Dinny's father, James, played the fiddle although it was a local fiddle player, Pat Mulherne, who became Dinny's fiddle teacher. This was to become a musical friendship which lasted a life time as Pat Mulherne played on into his 90's.

Dinny played with the group Aileach and recorded with them. Beyond his recorded legacy, Dinny's largest legacy will be the interest which he encouraged in the music among the young players of Inishowen. As a teacher he taught all round Inishowen, other parts of Donegal and Derry .

Among his fiddle pupils were Liz Doherty, Ciaran Tourish, Roisin and Damian Harrigan and an excellent young fiddle player, Jimmy Mc Bride, who died tragically in a car accident at a young age.

Dinny also played with the Clonmany Ceili Band for some years along with fiddle player Séamus Grant who was another important player in the Inishowen music scene.

Dinny has been fiddle showman, singer, composer and a great teacher to hundreds of aspiring music and dancing students. He also continues teaching other instruments as well as fiddle.

A book about Dinny containing some of his compositions was published in 2005 by Liz Doherty called “Dinny McLaughlin: From Barefoot Days A Life Of Music Song & Dance In Inishowen”.