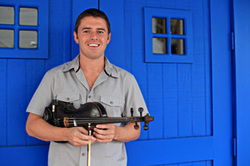 Manchester born fiddle and whistle player Colin Farrell is one of the leading lights of the contemporary Irish trad scene in the UK.  A former member of the band Gráda, he now lives in the USA where he plays with the band Creel.

Colin is also an accomplished tune composer and his tunes have been recorded by Gráda, Flook, Kevin Crawford and many others.

His best known tune is The First Pint, now a common session tune.

In 2010 Colin released an album of his own compositions called On The Move.

More information about this album and Colin's work can be found on his official website.

You can also find a complete list of his compositions here.