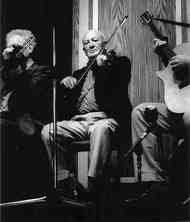 One of the great legends of 20th Century Irish music, Bobby Casey was a Clare born fiddler of exceptional ability.

Though mostly known as a fiddler, he composed some commonly played tunes, often just called Bobby Casey's. The best known is also known as The Porthole of the Kelp.
He also composed The Hairy Chested Frog and Quilty Shore.

One of the big names of Irish fiddle playing, Bobby Casey was born at the Crosses of Annagh near Miltown Malbay, Co Clare. He has lived in London since 1952. His father John ‘Scully’ Casey, who died when Bobby was 15 or 16, was a well-known fiddler as well as being a flute and concertina player. Scully gave lessons to Junior Crehan, as did Scully’s cousin, the noted dance master Thady Casey. Bobby in turn learned much of his playing from Junior Crehan and the two remained lifelong friends. Bobby was also influenced by the playing of Michael Coleman, Michael Gormanand Frank O’Higgins.
Along with Willie Clancy he went to Dublin about 1950 where he met, among others, John Kellyand the Potts family.
He moved to London around 1952. He was a regular at the Sunday morning sessions in the Favourite and Bedford Arms pubs which became rallying points for Irish musicians and rural emigrants in the Sixties.
In 1959 Ita Crehan helped him record Casey in the Cowhouse, literally recorded in an old cowhouse, and which along with four other tracks are now available on tape.
“A musician’s musician,” is how Muiris O Rochain of the Willie Clancy Summer School described him. He had an easygoing and likeable personality. His style was described as gentle, “with an exceptional flair for variation”. With Seamus Ennis, he performed at the first Willie Clancy Summer School in 1973 and returned frequently to Miltown Malbay to give classes, noted for their informal style where people came and went. In later years he moved from London to live in Northampton. Died May 13, 2000, and is buried in his native Clare. He was survived by his wife Ann, son Sean and daughters Susan and Angela.